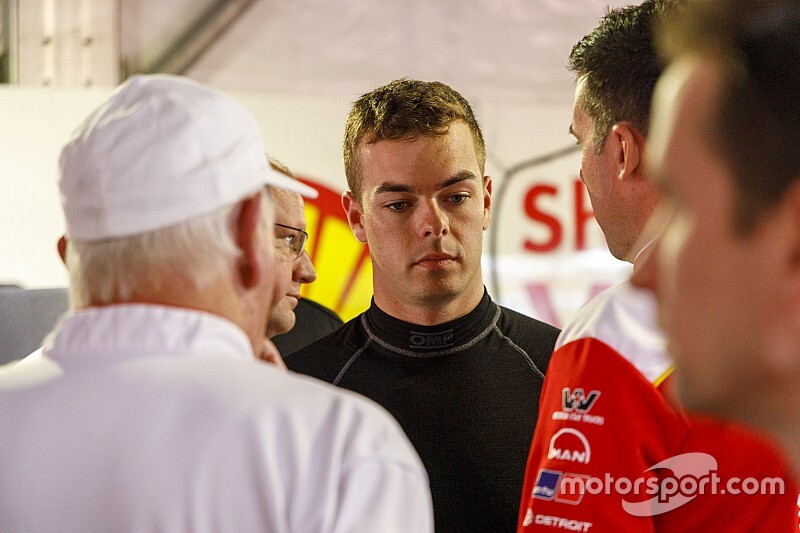 Scott McLaughlin has revealed that his post-crash MRI on Sunday was to check for a brain haemorrhage, after doctors weren't satisfied with the outcome of a CT scan.

The Supercars ace suffered a 43G hit during qualifying for Sunday's Gold Coast race, the impact tipping his Mustang on its side and even sending a shock absorber flying onto a nearby apartment balcony.

He was initially treated by track medical staff, before being transported to Gold Coast University Hospital for further checks, including an MRI.

He was later given the all-clear and discharged on Sunday evening.

McLaughlin has now revealed how serious that trip to hospital was, the results of a routine CT scan having flagged concerns of fluid on the brain, which could have been a sign of a brain hemorrhage.

"I was stuck in that neck brace which was so incredibly uncomfortable, and then they said 'we want to take you for a CT scan on your head and neck to check it’s alright, it should take five minutes'," said McLaughlin on the latest episode of the RSN927 Balls & Bumpers podcast.

"But it took 15 or 20 minutes and I thought ‘this is weird’. When we came out no one was really talking to me and stuff.

"They said ‘we just saw a bit of an anomaly on the brain, it’s meant to be 50:50, parallel, what the brain looks like, but it does look like yours has moved in some ways and there’s a little bit of fluid or substance there, something like that.

"There were three hours there before the MRI where I was absolutely shitting myself, everything is going through my head, me and [fiancee] Karly, sort of sitting there crying and stuff because it’s like ‘what’s going to happen?’.

"Thankfully before the MRI they checked my neck was alright, so I was all clear with the neck, which was really nice. I had the neck brace off just being pushed around in a wheel chair.

"Then I went to the MRI and they checked it all and an hour later, I was watching the end of the race, a doctor came in and said ‘you’ve got the all-clear, you’re ready to get back into it, you’ve just got to chill out for a few days or a week or so'.

"The relief and stuff after that, you just think the worse straight away, right? I was just so nervous. I probably sound like a bit of a sook but I did tear up a bit, well up a bit. I was just like ‘thank god’ and just gave Karly a big hug and kiss."

Having appeared mostly normal in the gap between leaving the circuit medical centre and being transported to hospital, it was a bizarre phrase used during a TV interview that caught the attention of those closest to him.

Referencing some tenderness in a sensitive area because of the crotch straps in the six-point harness, McLaughlin twice used the phrase "motherhood" instead of "manhood".

"I can hardly remember saying that… I don’t know what I was thinking," said McLaughlin.

"The doctors don’t really know me, right? So it’s people like [DJR Team Penske boss] Ryan Story and Karly who noticed on the interviews that I was slurring a little bit and mixing up my words.

"So I went to do the interview with Fox Sports and after that I went downhill, had a really sore neck, stiff... I went back into the medical area. The first medical check I was cracking jokes, I was like ‘let’s go and have a beer and watch the race with the team’.

"But I went downhill after that last Fox Sports interview.

"I went in and they said the impact I had, once they got the G ratings, was the equivalent of someone who’d been through trauma – so I was a trauma patient from that point on."

McLaughlin is expected to be fit to race at next week's Sandown 500, although he will need to be checked again in the lead-up to the event.

The DJRTP crew has already began work on fitting out a brand new chassis for him and Alex Premat to debut at the Melbourne circuit, while the crashed GC car will be repaired and retired.