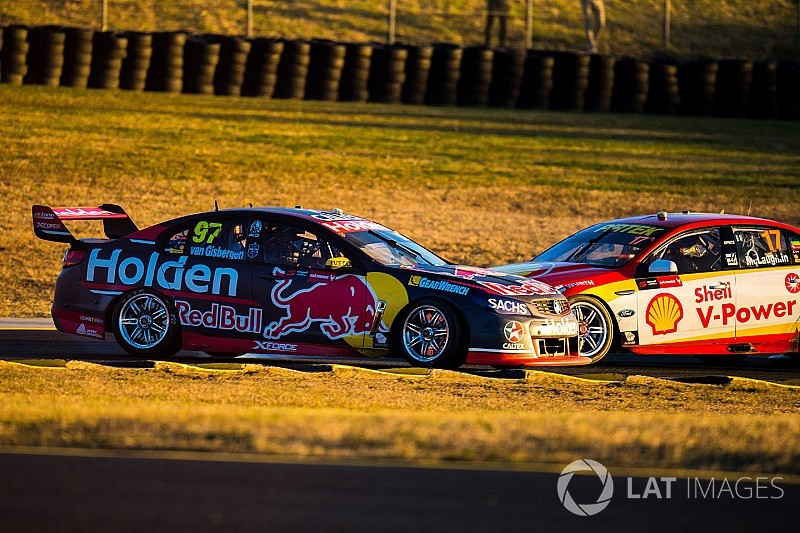 Scott McLaughlin has been whacked with another 18-second time penalty for his contact with Shane van Gisbergen at Sydney Motorsport Park yesterday, while van Gisbergen has been hit with a penalty of his own for a restart infringement.

The pair were embroiled in a controversial restart with 10 laps to run, which saw van Gisbergen get into the lead through Turn 1 before McLaughlin spun the Red Bull Holden at Turn 2.

As a result van Gisbergen was dumped to the back of the field, while McLaughlin finished second on the road but was slapped with a 15-second time penalty and classified 10th.

Following a post-race review of the incident McLaughlin has now been issued with a further 18-second penalty, which drops him further down to 24th in the final results.

“Following the Race the DRD conducted a further investigation into this Incident, reviewing evidence that was not available to the Stewards during the Race, specifically data from Car #17 which revealed that at the point of the contact with Car #97 which caused Car #97 to spin, the Driver of Car #17 had 25% throttle application which was not consistent with the degree of throttle application at the same point in Turn 2 used by Car #17 in other Laps,” read the official report from the stewards.

“The Stewards were of the view that a Reckless Driving breach warranted a Pit Lane Penalty but having regard to the fact that a 15 second Time Penalty had already been imposed during the Race arising out of the same Incident, the Penalty ought to be reduced accordingly and therefore imposed a further 18 second Time Penalty on Car #17 to be added to Car #17’s Race time (a Pit Lane Penalty equating to 33 seconds at this circuit).”

Van Gisbergen, meanwhile, has been hit with a 33-second for a restart infringement, the stewards determining that the Red Bull Holden driver overlapped with leader McLaughlin before the green flag had been waved.

The penalty drops van Gisbergen back to last place.

“Following the Race the DRD concluded an investigation into an allegation that Car #97, Shane van Gisbergen, breached Rule D11.2.13 (Safety Car Procedures), in that Car #97, which was behind Car #17 in the procession during a Safety Car Deployment until the Safety Car withdrew, overlapped Car #17 prior to the green flag being displayed,” read the report.

“A review of Judicial Camera footage and TV Broadcast footage revealed that the green flag was not displayed at the time of the overlap. After an admission to the breach, the Stewards imposed a Post-Race Pit Lane Time Penalty on Car #97 of Thirty Three (33) seconds to be added to Car #97’s race time in Race 17.”