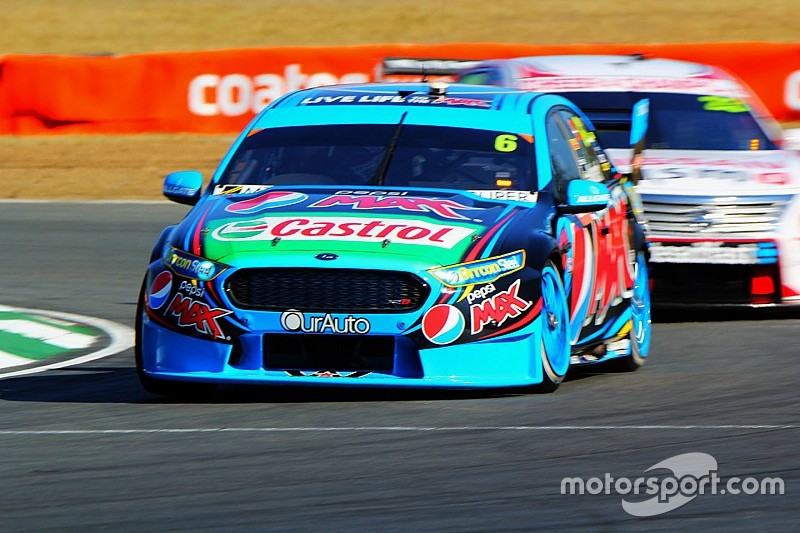 After making two poor starts on Saturday, Mostert made amends on Sunday with a perfect launch from pole when the lights went out.

Once in front, he lent on his soft tyres to gap Prodrive team-mate Mark Winterbottom. He retained the lead comfortably thanks to a slightly shorter first fuel stop, before setting up his race with a flawless stint on the hard tyre in the middle.

Despite needing slightly more fuel on the second stop, he’d comfortably done enough to emerge at the front of the field again. And from there, the race was run.

“The boys changed the clutch overnight,” said Mostert. “It felt pretty good off the start line, finally I got away with hesitating.”

It was Craig Lowndes who popped up in second, despite being jumped by team-mate Jamie Whincup at the start of the race. On Lap 5 Lowndes slotted back in front of Whincup and in behind Winterbottom, before jumping the #5 Falcon during the first stop.

Like Mostert, Lowndes did enough in the middle stint to stay ahead of Winterbottom, ultimately splitting the two Fords at the finish.

David Reynolds popped up in fourth, shadowing Winterbottom throughout the race, while reasonably short first stops and some good track position helped the Holden Racing Team pair of Garth Tander and James Courtney bank solid points with fifth and sixth.

Whincup finished eighth, but it could have been so much better. After running fourth in the early stages, Triple Eight opted to long-fill the reigning champion at the first stint.

That put him back in the pack, but would have given him the opportunity to make up a lot of places thanks to a short second stop… had a rattle gun issue not left him stationary too long, and subsequently behind Reynolds and the HRT cars.

Whincup then lost another spot to Will Davison nine laps from the end, the Erebus driver barging past to grab seventh.

Title contender Fabian Coulthard had a very average day, unable to do any better than 14th at the finish.

That was nothing compared to his fellow Kiwi Shane van Gisbergen, who failed to make headway after starting near the back of the grid and finished 21st after using the race as a test session.

Lowndes confident a breakthrough is close