Chaz Mostert says Tickford Racing will benefit from running a wildcard Mustang entry at The Bend next month. 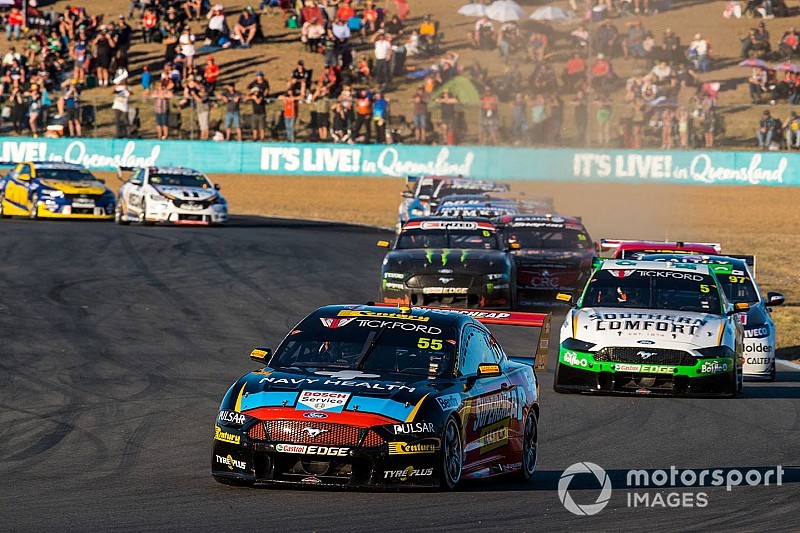 The four-car Supercars squad will expand its fleet of Mustangs to five for The Bend, giving Super2 driver Thomas Randle his main game debut as a wildcard entry.

The deal comes amid an impressive run of form for Randle in the second-tier series.

Having been denied a maiden win in Townsville last month by a pair of restart infringements, Randle struck back in fine fashion with victory in Race 1 at Queensland Raceway last Saturday.

He then almost clean-swept the round on Sunday, only missing out on a second win due to an airbox fire that robbed him of power in the closing laps.

The wildcard outing at The Bend is set to provide valuable milage for Randle ahead of his enduro debut alongside Lee Holdsworth at Bathurst in October.

However it's not just the 23-year-old driver that will benefit from being on the grid at The Bend, with star driver Mostert looking forward to having a fresh source of Mustang data.

[The deal is] pretty awesome for the young fella," said Mostert. "He’s been obviously doing a fantastic job in [Super2].

"He’s been a bit unlucky this year with a couple of things, and I felt for him [on Sunday] too; he deserved that win again, but unfortunately [there was] a little engine issue, which kind of carried across to a lot of our cars. So we’ve got to go back to the workshop and fix that.

"But it’ll be good, it’ll give us another opportunity to have a look at some data. It’s always good seeing a nice young bloke come through hungry as well.

"They seem to do a little bit different stuff in the car, so, I'm excited to get there, have a look at his data, and hopefully he can teach us old buggers a thing or two."

Randle is the latest Tickford protege to cut his teeth in Super2, with both Mostert and Cam Waters having run a similar development programme in the past.

The Tickford Mustang will be one of two wildcards on the grid at The Bend, with Jack Smith set to make a fourth round start for Brad Jones Racing.

Kostecki Brothers Racing is also set to run a wildcard entry at the three endurance rounds throughout October and November.