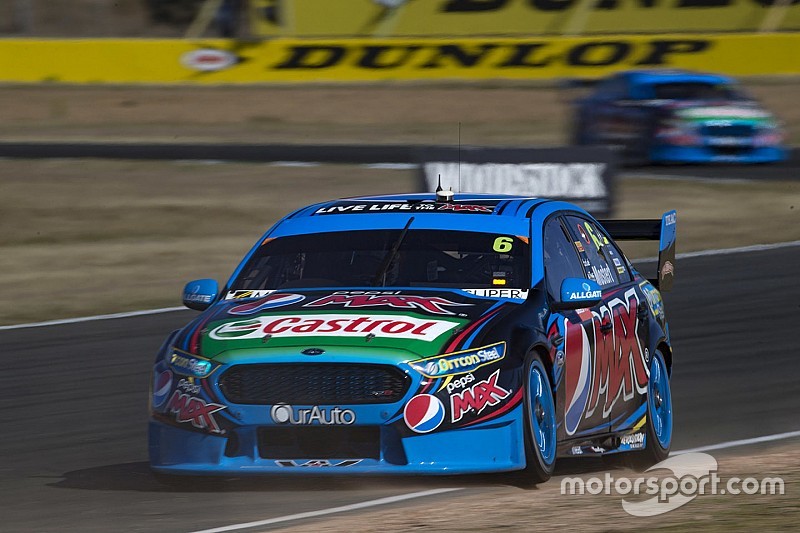 Chaz Mostert will head into today’s first qualifying session as the pace-setter, having finished on top of this morning’s final V8 Supercars practice session at Queensland Raceway.

The Prodrive Racing Australia driver rocketed to the top mid-way through the session, replacing team-mate David Reynolds in P1 with a 1m09.563s lap.

Despite a late soft tyre charge from Nissan’s Todd Kelly, Mostert held on to lead the session, with Kelly second ahead of Volvo’s Scott McLaughlin.

Reynolds ended up fourth, ahead of Erebus driver Will Davison, who popped up late on the soft tyre. Andre Heimgartner made it three PRA cars in the top six.

It was a solid session for Nissan; behind Kelly in second, Michael Caruso, Rick Kelly, and James Moffat finished seventh, eighth and ninth respectively.

Moffat’s time was made more remarkable by the fact that he was forced to put mid-way through the session after his Altima suffered a rear-wing failure. The damage was minimal, Moffat quickly re-joining the session.

The 15-minute hit-out was a less-than-encouraging for the Holdens, however. Jamie Whincup was the best of the Commodores in 10th, with Craig Lowndes in 12th, Shane Van Gisbergen 16th, and Fabian Coulthard 23rd.

Mark Winterbottom was another driver to endure a tough session, finishing 13th, well behind his three Prodrive team-mates.

James Courtney’s session lasted just four minutes, his Holden Racing Team Commodore smoking heavily mid-way through his first lap. He managed to crawl back to pit-lane, but took no further part in the session.

“Clearly there was a lot of smoke coming out of the back of the car. The engine looks alright, we’re just going through everything we’ve taken off and replaced last night.”