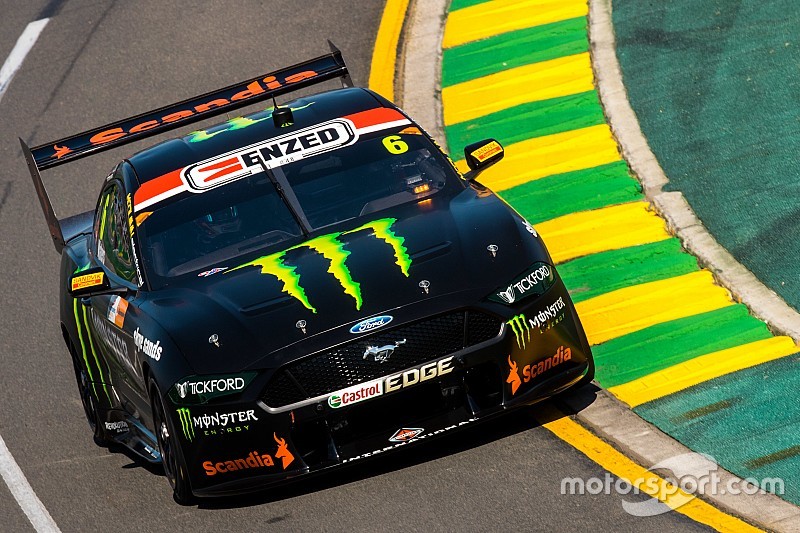 It was a Blue Oval top four lock-out led by McLaughlin in the first session, which could have easily been a top five had Chaz Mostert not run wide at Turn 1 on his crucial final run.

Mostert then qualified on the outside of an all-Mustang front row for Race 2, Jamie Whincup's Red Bull Holden the only Commodore in the top six.

However Waters, who came away with a third and a fourth from the two sessions, was in no mood to discuss parity following qualifying.

He called any parity claims 'bulls**t', and said Tickford's revival after a tough 2018 campaign was about more than the bodywork on the car.

"Everyone’s forgetting, they go on about this parity bullshit, but to be completely honest, 2017, 2018, [DJR Team Penske] were still up the front, winning every weekend [with] whatever car it was," he said.

"So we come into this year and it’s no different.

"The only difference is Tickford has taken a step forward and the percentage is a lot close to those guys, so I think that’s one thing to look at.

"I think when they bang on about parity and all this stuff, it takes away from all the boys that have worked [hard over] the Christmas break back at the workshop."

Teammate Mostert then added: "The controversy, too, you see it in the fans. Ever since we’ve started talking about it, since Adelaide, for whatever reason, it’s actually made a mad negative response from the fans – like, the media fuelling it.

"I mean [Whincup] was, what were you in the last one? Third, eight one-hundredths off?"

Waters continued by saying that, thanks to the twin-spring ban, his car actually feels worse in Mustang trim than it did as a Falcon.

“My car feels worse than last year to be completely honest with you, so twin-spring and that kind of thing has definitely changed,” he said.

“For my car, it’s really getting our head around the linear spring and the car’s comfortable and doing most things we want to do, but there are sections where I feel like the Falcon was better last year.

“If it’s Falcon or Mustang, I think it’s as much or more so what we’ve done with mechanical grip, to be honest.”

There have been no direct, public claims of disparity from other manufacturers since the introduction of the Mustang, although David Reynolds did say after Adelaide that it was "unfair" to compare the Holden to the Ford.

Roland Dane, head of factory Holden outfit Triple Eight, also spoke about the potential for Mustang dominance after Adelaide, but wouldn't been drawn into commenting directly about parity concerns.