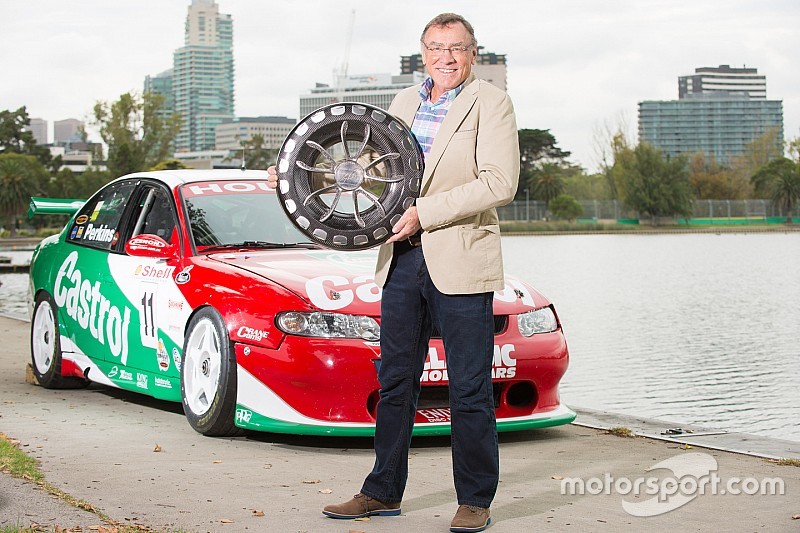 The covers have come off the Larry Perkins Perpetual Trophy that the Supercars drivers will be fighting over at Albert Park next week.

To celebrate the introduction of championship points to the Supercars Australian GP support races – a first in the history of the event – a brand new perpetual trophy honouring legendary Australian Touring Car driver, team owner, and 11-time F1 race starter Perkins will be on offer.

The trophy itself was designed and created by Adrien Fasel-Murphy, and engineering student at the RMIT University in Melbourne, along with his senior lecturer Scott Mayson.

It's design draws inspiration from the trophies handed out for both the Aussie F1 and MotoGP races, with 3D printing technologies used in the making of the carbon fibre and titanium sculpture.

“As an institution that is at the forefront of technology and innovation in Australia, the intricate design and flawless execution of the Coates Hire Supercars Melbourne 400 Larry Perkins Trophy by RMIT should come as no surprise," said Australian Grand Prix Corporation CEO Andrew Westacott.

"However, the technical skill, detail and effort required to produce this trophy must be commended and is a real testament to the university’s educational programme.

“Naming it after Perkins was a no-brainer, having had such a successful career in both Supercars and Formula 1, it was a clear choice to honour the great Larry Perkins with a trophy in his name."

“The decision to include the Coates Hire Supercars Melbourne 400 as a race for championship points at the Formula 1 2018 Rolex Australian Grand Prix has been widely celebrated, and the creation of the Larry Perkins trophy is a great addition,” Seamer said.

“Larry Perkins is a household name when it comes to Formula 1 and Supercars, so acknowledging his achievements is a great fit for the event, along with this unique trophy.”

Perkins himself applauded the design, and said it was an honour to have his name on the trophy.

“It’s truly an honour to have the perpetual Coates Hire Supercars Melbourne 400 trophy with my name on it, and it is made even greater now upon having seen the trophy itself – a remarkable creation."

Supercars will race for 300 points over four races across the AGP weekend, including a pair of twlighlight races.