Two-time Bathurst winner Russell Ingall is now officially a "Ford Man" after announcing he has signed a deal to drive the Caltex Havoline Falcon in next year's V8 Supercar Championship Series. Caltex has also announced a three-year extension of ...

Two-time Bathurst winner Russell Ingall is now officially a "Ford Man" after announcing he has signed a deal to drive the Caltex Havoline Falcon in next year's V8 Supercar Championship Series.

Caltex has also announced a three-year extension of its contract with Stone Brothers Racing. A fresh new car design and Ingall were officially "unveiled" at one minute past midnight Australian Eastern Daylight Savings Time today. 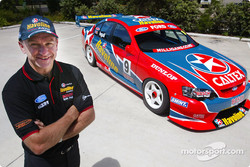 Ingall moved to his new base on the Gold Coast this week and is looking forward to starting work immediately with Stone Brothers Racing, which prepares the Caltex Havoline Ford at its workshop at Yatala.

Although speculated for sometime, Ingall's announcement could not be announced prior to January 1 because of contractual agreements.

Ingall replaces David Besnard at Stone Brothers Racing, but Caltex will continue a relationship with Besnard, who is set to announce his own new plans in the coming weeks.

Ingall will be a teammate for Pirtek Falcon driver Marcos Ambrose, who finished third in the 2002 championship after a dominant performance in the final round at Sandown in Melbourne on December 1.

The pair is set to have its first drive of a new SBR-built BA Falcon in a month's time at Queensland Raceway.

"I cannot tell you how excited I am about this move," said Ingall, who is nicknamed "The Enforcer". "Stone Brothers Racing is certainly one of the two leading teams in the V8 Supercar Championship and I believe it is on the verge of big things. "You know every ounce of energy and money is invested in making the cars go faster and as a race driver that's all you want to know. "This team is dedicated to winning races and that's exactly what we plan to do this year. "I would like to thank Ross and Jimmy (Stone) and Caltex for the opportunity and hopefully we can put a championship in the bag in our opening year.'

"We wanted to tell everyone as soon as legally possible about the signing hence the 12:01 announcement," said Caltex Brand Manager Lubricants, Steve Wruck. "Russell is a fantastic competitor and we look forward to sharing great success with him in the future. "Stone Brothers Racing has played an important role in helping develop the Caltex Havoline brand and we are sure Russell will be a great part of the mix as we go forward. "We are delighted to be also continuing our relationship with David Besnard and look forward to the announcement of his 2003 plans in the near future.

Ford Australia's Geoff Polites was delighted with Ingall's decision to continue his career with Ford and its new BA Falcon.

"Russell Ingall joining the Blue Oval's team of racing drivers is fantastic news for Ford fans. His driving capabilities are only really matched by his personality," said Polites.

"We're sure that Ford fans will make him feel welcome and support him for exactly the same qualities they've cursed in the past.

"Stone Brothers Racing have the results on the board during 2002 and Russell will increase their chances of building on these successes this year."

Stone Brothers Racing's Ross Stone, said the signing of Ingall was part of the evolutionary process of his team.

"Russell has earned himself a reputation of being a fast and aggressive driver, who wants to win at all costs," said Stone. "We believe that Russell will be a great asset for our team as we head into the new season with a brand new BA Ford race car and championship aspirations. "We certainly have a lot of work to do before now and the first round, but I feel we have a terrific pairing in Russell and Marcos (Ambrose). "We would like to thank David Besnard for all his efforts over the last couple of seasons and look forward to his new announcement in a couple of weeks."

While testing will commence in a few weeks, Ingall's inaugural outing in the new Caltex Havoline BA Falcon will be at the Foster's Australian Formula One Grand Prix from March 7-9.

The first official championship round will be at the Clipsal 500 in Adelaide from March 21-23.