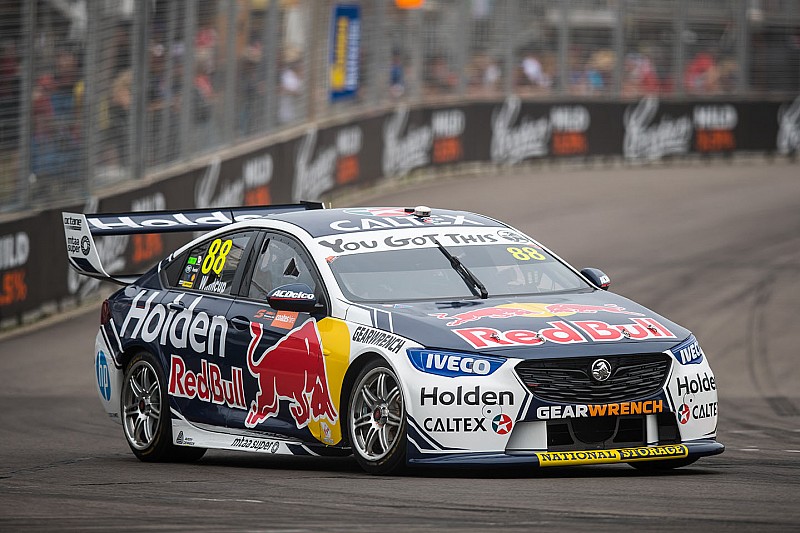 Jamie Whincup secured the final position on offer for the 2019 Supercars season with a superb lap in the Top 10 Shootout.

Running second last in the single-lap dash, Whincup put himself the best part of the three-tenths clear of Penske pair Fabian Coulthard and Scott McLaughlin with a 1m10.555s.

"That one meant a lot," said Whincup, who made a costly error in the closing stages of yesterday's opening race.

"[I] went all out, [the] track was obviously a bit slower than yesterday, but I got the most out of the car.

"It's a bloody good feeling to get pole around here. We just gave it all we had. Obviously the time we're very, very happy with – but you've got to keep a wrap on it because 95 laps is a long way this afternoon.

"We'll have a little celebration of this right now and then focus on the race."

Coulthard won out from the two Shell Fords, the gap between him and McLaughlin just 0.02s.

"It's a fun joint, it's one of those tracks you can actually get in and wrestle the car, where sometimes you have to under-drive and it's a little bit of a fake way of racing," said Coulthard.

"To get in here and do a good, fun lap around there and have this track to yourself is awesome.

"Every time we've stopped early it hasn't worked in our favour, so we'll see what happens [in the race]."

Scott Pye, who starred during yesterday's race, made up four positions compared to regular qualifying to end up fifth, alongside Anton De Pasquale on the third row.