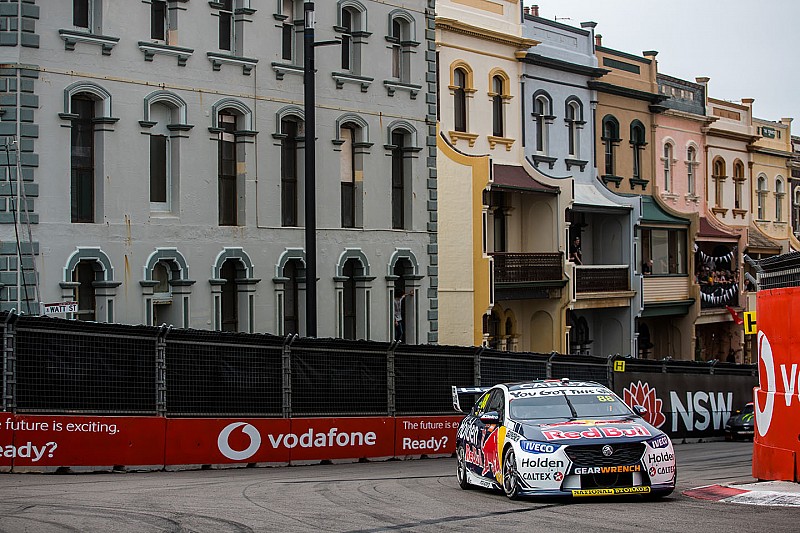 Jamie Whincup rounded out the Supercars season with a comfortable victory over Fabian Coulthard, while DJR Team Penske secured the 2019 teams' championship.

But even a second race win of the weekend wasn't enough to earn Triple Eight anything beyond bragging rights, the Penske Ford squad sealing the teams' championship.

Tim Slade, off-contract and likely to be on the way out of Brad Jones Racing, ended a difficult season on a high note with his first podium since Albert Park back in March.

Whincup made light work of the start, comfortably beating Cam Waters to Turn 1 to settle into the lead.

At the same time teammates Coulthard and Scott McLaughlin effectively went side-by-side through the first corner and up the chute to Turn 2 as they squabbled over third place, a battle for both position and pit priority that Coulthard was able to narrowly win.

Waters didn't spend much of the first stint staring at Whincup's rear wing, the Monster Ford pitting on Lap 5 in search of clean air.

McLaughlin did likewise 10 laps later, Whincup and Coulthard continuing – separated by around 4s – until the Safety Car made its first appearance of the weekend on Lap 24.

The SC intervention came courtesy of Anton De Pasquale burying his Holden in the wall, the outcome of an unsuccessful attempt to hold off James Courtney on his out-lap. The contact wasn't good news for Courtney either, his WAU Holden left with a puncture.

Things only got worse for the 2010 series champ from there, an unsafe release after pitting for a new tyre resulting in a penalty.

With Whincup and Coulthard both stopping during the SC, Waters and McLaughlin filtered back to the front for the Lap 30 restart.

Waters, on the oldest rubber in the field, did well to keep McLaughlin behind him until making his second stop on Lap 49, which dumped him back in the pack.

Whincup and Coulthard made their second stops a lap later, using their fuel advantages from the first stint to reclaim effective control of the race, before McLaughlin pitted again on Lap 51.

The recently-crowned champ emerged on a strategic collision course with Slade and Scott Pye. The former managed to jump McLaughlin with his Lap 52 stop, while the latter came out right on the back of the trio after coming in five laps later.

Out from there was no stopping Whincup across the final stint, the T8 driver avoiding a repeat of Saturday's mistake as he cruised to a 2.1s win over Coulthard.

"I'm really proud of everyone, they fought hard until the end,"said Whincup.

"We didn't have that much performance at the start of the year, but we chipped away and two wins this weekend for the team gives us confidence going into next year that we can certainly be contenders.

"It wasn't much of a [title] battle, unfortunately car #17 disappeared up the road a bit, but hopefully we can take it to them next year. Congratulations to Scotty, he did a great a job."

There were no changes behind the top two either, Slade managing to pull clear of McLaughlin to the tune of 1.5s, as Pye ended up a second behind the Shell Mustang.

Chaz Mostert charged past teammate Waters in the final stint to end up sixth in his final appearance for Tickford.

Shane van Gisbergen, who started back in 21st, got past Waters too after a thrilling late battle, the pair finishing seventh and eighth.