Nissan has unveiled the engine that will power its V8 Supercars Championship campaign from next season at the team’s headquarters in Melbourne, Australia today.

Our Nissan Altima V8 Supercar will use the latest in engine technology...

The engine department is housed in the extension to the Kelly Racing facility, which will house all 19 departments of the team by the time it is rebranded as Nissan Motorsport on 1 January 2013. The facility extension includes brand new engine assembly, dyno cell, CNC machining, carbon fibre and composite, paint and spray booth areas.

The engine carries ‘Powered By Nissan’ on its cam covers, branding used on Nissan racing engines around the world, including the revolutionary Nissan DeltaWing that was the star attraction at this year’s Le Mans 24 Hour.

Nissan will proudly be the only manufacturer to use a production engine in the V8 Supercars Championship, using the same engine that will feature in the all-new Nissan Patrol that goes on sale in Australia in early 2013.

The VK56 engine, which is made at the Nissan facility in Decherd, Tennessee in the United States, also powers the Nissan Titan, Armada and Pathfinder, as well as the Infiniti QX, which are all sold in the North American market.

The engine brings new technology to the V8 Supercars grid, with all-aluminium block and heads, Double Overhead Cam (DOHC) and 32-valve configuration for quad camshafts and four valves per cylinder, twice the amount of the incumbent engines. 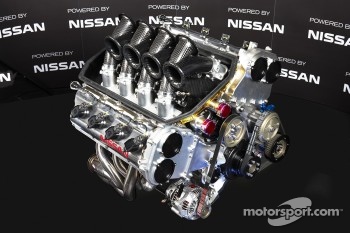 The V8 is 90 degrees in configuration, uses electronic fuel injection and a MoTeC electronic control unit.

VK56DE – a history of motorsport success

The NISMO-developed version of the VK56DE powered the Nissan GT-R FIA GT1 entry to FIA GT1 World Championship victory in 2011.

The VK56DE is also the powerplant of choice in many motorsport applications around the world as a formidable choice for high horsepower and efficiency.

Another engine from the Nissan VK family, the VK45DE, has claimed victory at the Le Mans 24 Hour sportscar race in the LMP2 category and was formerly used in the Nissan GT-R entries fielded by NISMO in the Super GT Championship.

A key addition to the team’s engine department is Shigeru Kugimiya, who has joined Kelly Racing to work purely on the Nissan engine program. Kugimiya has previously worked with NISMO in Japan on motorsport projects. He also has experience in V8 Supercars with Gibson Motorsport and Walkinshaw Racing.

As a native Japanese and a former NISMO employee, Kugimiya brings vital knowledge and language skills to the team. 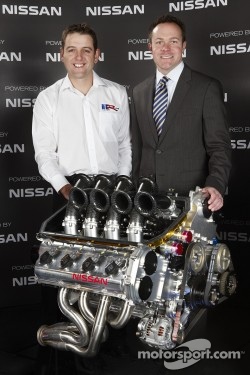 In the second half of 2011, while negotiations with Nissan were ongoing, Kelly Racing took the initiative to import a VK56DE engine to investigate its viability for V8 Supercars.

With this research and dyno data, and NISMO’s previous experience developing the VK56DE for the Nissan GT-R GT1 in the FIA GT1 World Championship, this engine was confirmed as the best option for Nissan Motorsport and V8 Supercars.

In May, Kamei Yasuharu General Manager – Development Department at NISMO, visited Kelly Racing’s headquarters and observed the team at the Phillip Island event, further strengthening communication and understanding between NISMO and Nissan Motorsport.

Given its intimate knowledge of the VK56DE in motorsport applications, NISMO has been able to guide and verify the design work undertaken by Kelly Racing on the V8 Supercars configuration of the engine, as well as offer input on using production engines in motorsport.

While the appearance and specification of the Nissan Motorsport VK56DE may differ from the Ford and Holden engines currently used in the V8 Supercars Championship, the team will work closely with V8 Supercars on achieving a fair playing field for the 2013 season.

The Nissan Motorsport engine brings the latest in Nissan engine technology to the V8 Supercars grid. Vastly different to the currently V8 Supercars engines, many areas of the engines will be adjusted to comply with V8 Supercars technical regulations.

The engine has been ‘sleaved’ and the bore and stroke adjusted to fit within current V8 Supercars regulations, resulting in a reduction in engine capacity from 5.6 litres to five litres.

“The unveiling of the VK56DE engine is a key milestone in Nissan Motorsport’s journey to the 2013 V8 Supercars Championship grid,” said Todd Kelly.

“We are very pleased to show this engine for the first time. It looks sensational and is a key ingredient to Nissan’s entry into the sport. 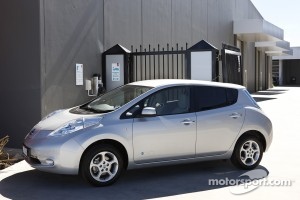 “Everyone involved in Nissan Motorsport is proud of the fact that we will race a production-based engine and that we will truly be ‘Powered By Nissan’.

“A huge amount of time and effort has gone into getting the first VK56DE completed and the result is a spectacular looking engine.

“There is still a lot of work to do but we’re proud to unveil our Nissan engine technology today at our team’s facility.”

“Our entire team is very excited to reach a key milestone with the unveiling of our Nissan Motorsport engine,” said Rick Kelly.

“2012 is a massive year for our team, with the Nissan program housed in the brand new section of our facility.

“With new cars and engines and all-new facilities these are exciting times for our team.”

“Using a production engine in our Nissan Altima race car means that our V8 Supercar is truly ‘Powered By Nissan’, with the VK56 engine also powering the all-new Patrol that goes on sale in Australia at the start of next year.

“Our Nissan Altima V8 Supercar will use the latest in engine technology and will look spectacular when it hits the track next year as a perfect example of ‘Innovation That Excites’.”

BOC mixes it up at eastern creek