Michael Caruso and Daniel Gaunt will lead the return of Nissan to Mount Panorama, armed with 'retro-inspired' race suits for the Supercheap Auto Bathurst 1000 this weekend.

After 21 years on the Mountain’s sidelines, Nissan heads back to the classic Bathurst race armed with four Altima V8 Supercars to be driven by Caruso/Gaunt (#300), James Moffat/Taz Douglas (#360), Todd Kelly/David Russell (#7) and Rick Kelly/Karl Reindler (#15).

The retro-race gear of Caruso and Gaunt matches the suits that Jim Richards and Mark Skaife wore in the early 1990s during Nissan's dominant period in Australian motorsport that brought the Japanese giant two Bathurst 1000 wins (1991 and 1992).

And to celebrate Nissan’s return to Bathurst, all eight drivers, two of its Altima V8s plus a classic Bluebird Turbo posed for an image at Bathurst this morning, officially marking the marques Mountain comeback. 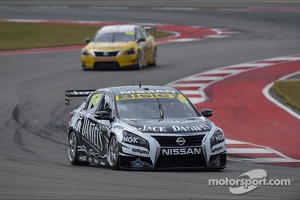 It has been a year of learning for Nissan Motorsport. The team has scored 18 top 10 race finishes, but none better than the 1-2 finish at Winton in August where Moffat led home Caruso to an historic victory.

While the 6.213km Mount Panorama course is regarded as the toughest on the V8 Supercars schedule, the team heads to Mount Panorama to do Nissan’s Bathurst heritage proud.

V8 Supercars track action kicks off Thursday for practice. Qualifying will be held on Friday afternoon, followed by the famous Top 10 shootout on Saturday.

“I’m pretty exited to be heading up to the Mountain, and after Nissan being absent from the race for the past 21 years, it’s pretty special to be involved in its return year,”

“When I signed up with Nissan, I always pictured going up to the Mountain and I knew it would be pretty cool.

“Hopefully Daniel and I can do a solid job at Bathurst. Personally, I think we did a good job at Sandown, and if everything comes together for us, I reckon we’ll be competitive.

“Our suits look brilliant. They are pretty close to the real thing. If we could stand on the podium … we might not have the same reception that Jim and Skaifey had, but we just want to do the brand proud. 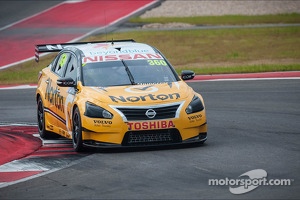 “We’ve also got a new number for the race and I’m looking forward to revealing the reason behind it.”

“Driving for Nissan back in the late 80s and early 90s was fantastic. They were just starting to become competitive, and every result we had was a fantastic result – especially the two wins we had in the GT-Rs,” said Richards.

“I think Nissan’s return to V8 Supercars has been incredible. I was starting to get a bit bored with just Ford and Holden, but now that Nissan and other manufactures are back, it’s the best thing that could have happened to the sport.

“I think Michael and Dan will do a great job for Nissan. They’ve already had some great success at Winton, and hopefully it will be Nissan’s day at the Mount.”

“Nissan has plenty of history up on the mountain, and I’m super looking forward to pairing with the brand and pairing with Michael for the big race,” said Daniel Gaunt.

“It has been a long time since Nissan was at Bathurst, and after a good run at Sandown, I think we can go there and aim for a reasonable result.”

“You always look forward to this time of year – if you don’t look forward heading to Bathurst, then there’s something wrong with you!” said James Moffat.

“You hear everyone say how great it is, and for me, you can’t put it into words about what the whole week means.

“Going back with Nissan in their first Bathurst attack in 21 years is going to be special, and hopefully we can give everyone at Nissan, Norton, Toshiba and all of our other partners a result that they can be proud of.”

“It’s probably the only track I get excited to race at these days! It’s an amazing place and it’s one of those tracks and you just want to improve all the time,” said Taz Douglas.

“It’s hard to know exactly where we’ll be, but we’ll just suck it and see when we get there.

“A top 10 would be a very good effort, but even inside the top 15 in this category is nothing to sneeze at. I’ve actually only finished the race once. This is my fourth attempt, and I really want a decent result, and this is definitely my best chance. “

“Bringing Nissan back to Bathurst is huge, it’s almost the same as when we turned up at Clipsal for the first race of Nissan being back in V8 Supercars after 20 years and in some ways it’s probably a bigger deal that Nissan is back at Bathurst,” Todd Kelly said.

“It’s going to be a big weekend for us here and I just can’t wait to get these things out on to the track and see exactly what they can do.

“If we get the car tuned well, we should be extremely strong through the top of the mountain based off all the races we have done so far with the Altima.

“We’re generally very good in the corners when we get the car set up right, so hopefully we can do that. I think we really need to nail that part of it so that we’ve got lots of speed over the top, which will make us less vulnerable down the straight.

“Potentially we will lack a bit of straight line speed, and we still don’t know until we get a few laps under our belt what our fuel economy will be. All in all, I just can’t wait to get in the car and see how it goes around this place.”

“I can’t wait to get on the track; it seems like too long ago that we were at Sandown. I was revved up after Sandown, so I can wait to hit the track,” David Russell said.

“It’s my favourite track, my favourite time of year and it’s going to be a great experience, not only to be back with Todd Kelly, but also to be part of a factory outfit with Nissan Motorsport.”

“I tell you what, the Bathurst 1000 has come around quickly, it’s been a busy year for us in the first year of Nissan Motorsport and Bathurst is a big one,” Rick Kelly said.

“We’ve been looking forward to coming here in a Nissan since we debuted the program and the way our car handles mid-high speed, it’s going to be an exceptional car across the top of the mountain.

“Now that we’re here and looking at the mountain in the background, we can’t wait to jump in the car and see what it feels like around the track.”

“It’s fantastic to be here back at Bathurst, the track is looking amazing and the atmosphere already this early in the week is pretty special as you would expect,” Karl Reindler said

“I’m pumped to be back and just really looking forward to teaming up with Rick Kelly and seeing what we can do in the big race on Sunday.”

Erebus steals pole from favourites on the mountain