From the youngest to the newest, being an owner in the V8 Supercars is not an easy job; especially when one increases the number of cars in their garage.

Lucas Dumbrell, the youngest team owner in the series expanded his team to now run two cars with two new drivers. He has taken on board Scott Pye, a 2010 competitor in the British Formula Ford Championship and former Dick Johnson Racing driver Dean Fiore. Interestingly, Fiore has leased his license back to Johnson for the 2013 calendar. Dumbrell, a former driver himself until his horrific crash in 2009 in a Formula Ford has without doubt got his work cut out for him, however, with the team leasing Triple 888 Racing engines, similar to Tekno Autosports there may be some wins on the horizon.

Talk in the media is whether James Courtney will remain with the Holden Racing Team. In his third year, the 2010 champion will be looking to his future. That comes at cost if you are a team owner, as the driver with the movie star looks commands $1M a season, apparently. Since moving to HRT he hasn’t provided the expected results but that may change after he told the team that his 2013 has been great out of the truck. 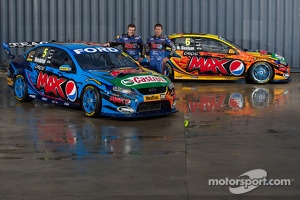 Will Davison and Mark Winterbottom present the 2013 Team FPR Ford

Former drivers Rusty French and Rod Nash purchased Ford Performance Racing from Prodrive’s David Richards, after Nash already retained the Bottle O Racing Team license. With four cars in the garage after Alex Davison joined this year it is going to prove a hand full for the dual owners. The ace up their sleeve is the fact they have leading drivers Will Davison and Mark Winterbottom behind the number 5 and 6 cars.

Betty Klimenko of Erebus Motorsport is not your average team owner. The first woman to enter the category has no qualms mixing with public after being sighted signing posters during a break from her busy schedule. With three cars under her banner it is no easy feat, but don’t let the tattoos and coloured streaks through her hair fool you. Not only has Betty brought the German tri star to the championship, she has also “imported” German driver in Maro Engel, a former F3 and GT Championship driver who won a round at Phillip Island in 2012.

Agony for Lockwood Racing and Coulthard in first Adelaide race

SVG does it again in Clipsal 500 race 2 qualifying