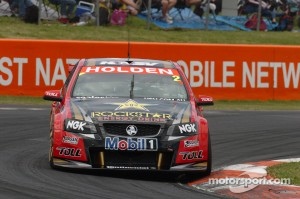 With 128 points separating the four, and 600 points on offer, this year’s title remains wide open.

Percat’s season has seen the likeable South Australian notch up three wins so far. His qualifying performance has also been outstanding, starting no lower than fourth in any of the thirteen races to date.

On the series biggest stage and front of a record crowd, Percat enjoyed a faultless weekend at Bathurst with two wins from two starts.

From second on the grid, Percat drove a textbook race and led from the lights to the chequered flag, to win the first fourteen-lap race from Chas Mostert by a comfortable margin of almost five seconds.

The second fourteen-lap encounter was one of the hardest fought and most entertaining Dunlop series races seen in many years.

Once again Percat grabbed the lead off the start and immediately came under immense pressure from Mostert, the two dicing and swapping the lead throughout the entire distance with Percat’s winning margin just .1sec.

Nick goes to Winton with a great deal momentum, following his successful Bathurst weekend and said: “I am looking forward to this weekend at Winton. I’ve done a lot of laps around there as it’s our, (Walkinshaw Racing), test track.

“I think it’s going to be a pretty close weekend between myself Chaz, Scott McLaughlin and Scott Pye.

“There will be some great racing. My goal for the weekend is to try and get some wins under my belt and use the reverse top ten to get some points back on Chaz, put some pressure on him and take it down to the last round at Homebush, where I usually go pretty well. That’s the plan, so we will see how it unfolds”.

Dick Johnson secures an exciting future for his team