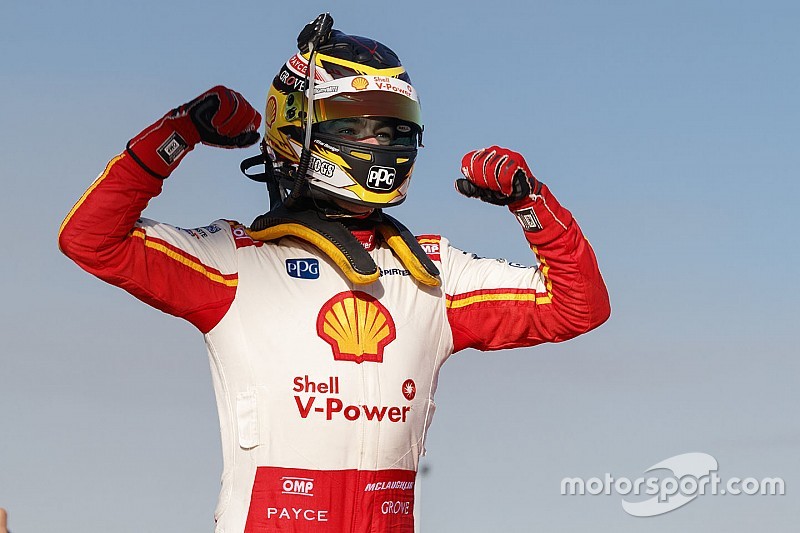 Scott McLaughlin has now won three Supercars races on the trot, after a dominant display in the first race at Barbagallo Raceway.

McLaughlin dominated the opening stint, sprinting into the distance while teammate Fabian Coulthard, who had jumped Cam Waters at the start, created a bottleneck.

The lead got out to around six seconds before McLaughlin made his stop on Lap 19, the Kiwi comfortably emerging with the effective lead.

As the stops shook out his lead sat at just under four seconds, but the runaway leader had no problems building on that.

With 10 laps to go it was close to seven seconds, before McLaughlin let it close back to 5.6s as he secured his third-straight win.

"I got a really good start, and then trucked on," he said. "They went attacking and tried to undercut us, but we managed to stay out, and I knew I had the tyre pace at the end. We just had the gap, it's nice when you have those. They don't come around often so I'll enjoy it.

"Three in a  row now, it's really good for our championship."

The battle for second was more interesting, with a number of drivers occupying the position across the race. First it was Coulthard, with that excellent rear-gunner performance for McLaughlin in the opening stint.

Chaz Mostert then popped up in second at the start of the second stint, thanks to the undercut from a Lap 16 stop on a risky two-stop strategy. Jamie Whincup went in the same direction, slotting into third thanks to his Lap 15 stop.

Those two ran nose-to-tail until Lap 33, when Mostert decided to hit the lane for a second time. Whincup, right on his bumper, turned the pitlane-bound Tickford Ford into a spin. That meant a five-second penalty for the Red Bull driver, before his Lap 39 stop dumped him back in the pack anyway.

Tim Slade then emerged in second, having run a traditional Lap 21 single-stop strategy. But he ultimately lost out to Mark Winterbottom, who went with a late first stop on Lap 29, but had tyre speed to burn in the closing laps.

That strategic move helped Winterbottom go from 11th with 10 laps to go to second, the impressive late charge netting Tickford its first podium of the season.

"I'm really proud of the team, we had a really good car then," he said."From where we've been to how good the car felt then, we're not driving any different, it's all the hard work they've done."

Shane van Gisbergen did likewise, stopping late and then charging his way through the field to finish third.

"The car was pretty good in the race," he said. "It was hard to work out what was going on, with cars on different strategies. But it was pretty awesome coming through at the end."

Slade dropped back to fourth, followed by Craig Lowndes and Whincup. However while he was sixth on the road, Whincup was ultimately classified 11th thanks to his penalty.

That meant Waters was sixth, ahead of Will Davison and Coulthard. Nick Percat made good ground to finish ninth, while Mostert was 10th despite that spin and additional stop.

In terms of the championship, the win gave McLaughlin some breathing room, van Gisbergen now 119 points behind the Penske Ford driver.

The biggest loser in terms of points was Reynolds, who went from running near the front in the first stint to right out of the game thanks to a slow stop. He ultimately came home 17th, and went from 60 points behind McLaughlin to 156 points behind.