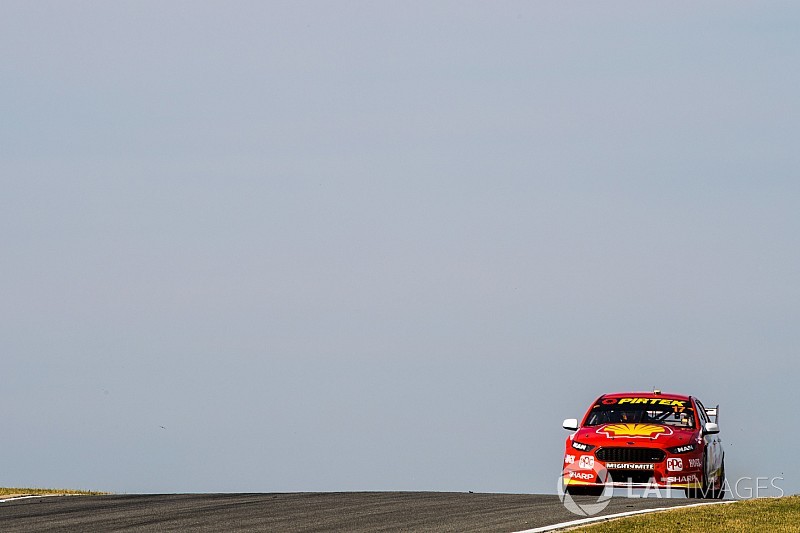 Scott McLaughlin took pole position for this afternoon's opening Supercars race at Barbagallo Raceway, while both factory Holdens will start outside the Top 10 after being knocked out of Q2.

McLaughlin needed two bites of the cherry in Q3, going fastest with a 54.774s on his first run, only to be immediately knocked off top spot by Cam Waters' 54.712s.

That meant McLaughlin had to go to a second set of tyres late in the session, a 54.639s on that final run good enough to relegate Waters to the outside of the front row.

"I actually made a meal of it," said McLaughlin. "I didn't give myself a big enough kick up the backside after practice, so I need to go back and look at it. I'm a bit annoyed with myself, I felt like we could have done that on my first set."

The second row is all Penske/Tickford as well, Fabian Coulthard third and Mark Winterbottom fourth.

Tim Slade qualified fifth thanks to a lap early in Q3, followed by Chaz Mostert and David Reynolds, who went the long way from Q1.

Craig Lowndes was the sole Triple Eight driver in the Top 10 with eighth, ahead of Anton De Pasquale and Will Davison.

The biggest surprise from qualifying was the lack of Red Bull Holdens in Q3. Both Jamie Whincup and Shane van Gisbergen failed to make it into the final phase of qualifying, the Kiwi set to start 12th while the reigning champion will start 14th.

"Yeah, no good," said Whincup. "Not really sure what's going on. There's a lot of grip out there, and we didn't maximise the grip.

"We've got some work to do. The car didn't feel that bad, just not quite quick enough. Short lap you only need to lose a little bit and you're out of the 10."

There were some big casualties in Q1 too, with James Courtney, Michael Caruso, and Nick Percat all failing to make it out of the first 10-minute session.

Richie Stanaway was the man on the Q1 bubble, finishing up seventh fastest in the session to grab 17th on the grid. Percat was right behind the Tickford Ford, while Caruso will start 19th and Courtney back in 21st.

Rick Kelly didn't even get the chance to fight in Q1, an engine problem ruling him out of the session after just a single lap. He'll start today's race from dead last.