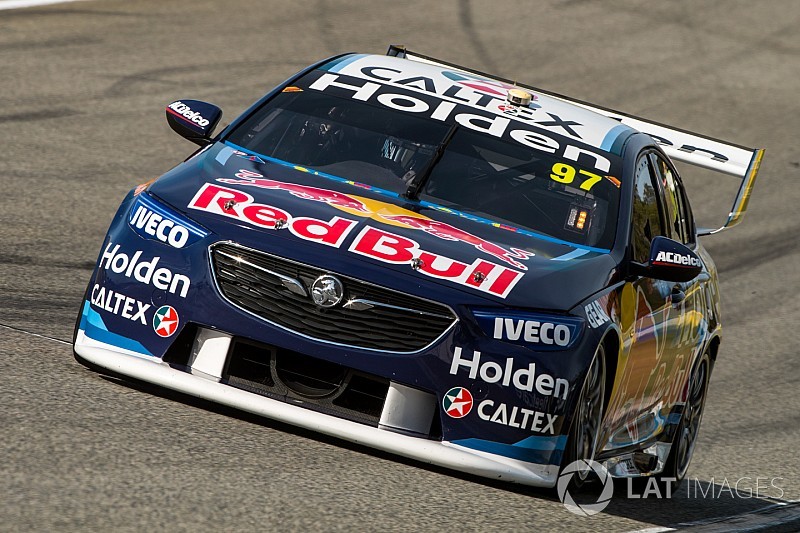 Shane van Gisbergen led a Red Bull Holden one-two in Sunday qualifying in Perth, while both Penske Fords failed to get out of Q1.

Spots of rain with six minutes to go in Q3 made for a frantic end to the segmented qualifying session, the final 10 all forced to rush their final runs due to the threat of heavier rain.

It was van Gisbergen who ultimately got the best of that final green tyre run, going from fourth after the first runs to pole with a 54.905s.

"It's a massive change in conditions, very windy into the last corner," said van Gisbergen. "It made a huge difference.

"Thanks to the team, we really turned it around. We didn't make Q3 yesterday, so it's been an awesome turnaround. Looking forward to the race this afternoon."

Jamie Whincup chimed in to make it a Red Bull Holden one-two, falling just 0.02s short of his teammate.

Chaz Mostert was third fastest, while Andre Heimgartner was the surprise performer of Q3 with the fourth quickest time and best of the three Nissans in the Top 10. He could have even been on pole had heavier rain arrived, the Nissan driver having been quickest on the first Q3 run.

Michael Caruso was best of the drivers who had to come all the way from Q1 in eighth, followed by James Courtney and Jack Le Brocq.

Tim Blanchard was the man on the Q2/Q3 bubble, the Brad Jones Racing driver set to start 11th after narrowly missing out on a spot in the final session.

The biggest shock of qualifying was the Penske Fords failing to get out of Q1.

Having been forced to go the long way after missing the Top 10 in Practice 4, both Fabian Coulthard and Scott McLaughlin were then caught out in the 10-minute Q1.

For McLaughlin the issue was running wide at Turn 6 on his first set of tyres, followed by the decision not to take on a second set of greens. As a result he'll start the race from 19th.

"I put my hand up, completely my fault," he said.

"I chased it too much into the bowl. I just locked the front and went wide. I was on a pretty decent first sector; I put my hand up for that.

"We'll learn from it and we'll just have to fight through. We thought we might have been okay because the track was slow. It's all hindsight, we wanted to save the tyre and whatever. That's where we're at, I can't do much more. I stuffed up."

Coulthard did go for a second run on greens, but front locking into Turn 1 meant he could only manage seventh for the session and 17th on the grid.

"I think we're all a little bit surprised to be fair," Coulthard said. "I just had chronic front lock into one, which I haven't had all weekend. I didn't do my lap on the first lap when you're required to do it around here, I had to make the best of the second."

The Penske Fords weren't the only big names to be caught out in the first session, with Mark Winterbottom and Cam Waters also failing to get out of Q1. The Tickford Ford pair will line up 18th and 22nd respectively.

Craig Lowndes, meanwhile, will start from the back row alongside Garth Tander.