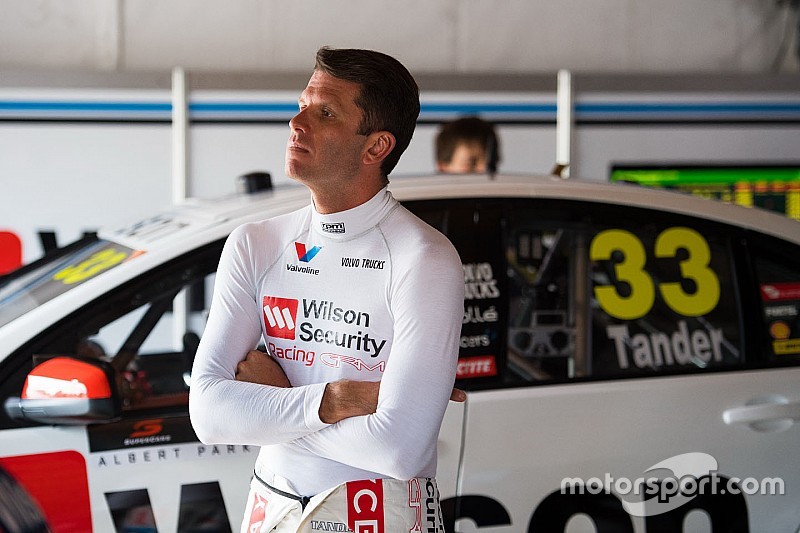 The Garry Rogers Motorsport driver spent the majority of the session buried in the midfield, before bolting on a fresh set of supersoft Dunlops with a couple of minutes to go for a final run. The West Australian pieced together a 55.645s, good enough to give him top spot.

“I had a feeling our car would be better here than it was at Phillip Island,” said Tander.

“It was a really productive session. It’s hard to know where you are in the middle of the session, because the tyre falls away so quickly, and then you put a fresh tyre on at the end and it’s like you’ve won lotto.”

Jamie Whincup slotted into second spot in the Triple Eight Commodore, having fired to the top with a 55.694s a little over 15 minutes from the end of the session. He couldn’t improve on his final run, though, which left him trailing Tander at the finish.

James Moffat capped off a great session for the GRM squad, making his own big improvement right a the flag to end up third fastest with a 55.817s.

James Courtney and Rick Kelly were fourth and fifth, both having hung around near the top throughout the 45-minute session, while points leader Fabian Coulthard finished down in sixth having been the first under the 56s barrier with a 55.908s.

Tim Slade rounded out the Top 10, knocking Shane van Gisbergen down to 11th with a late improvement.

Surprisingly there were no Prodrive Fords in the Top 10, Mark Winterbottom best of the Falcons down in 15th, one spot clear of Chaz Mostert.

Scott McLaughlin was surprisingly off the pace as well, ending up down in 20th. He also had a run-in with Nick Percat and Scott Pye, who confronted the Kiwi after feeling they’d been held up late in the session.

“I think Nick and Scott Pye have got some sort of issue, but I was on a race run,” explained McLaughlin.

“In practice you just try and do your own session. I was trying to do my best not to stuff too many people up, but I also want to get a good programme for myself. If it was qualifying obviously I’d get out of the way. It was animated from their side, I was pretty cruisey. It is what it is.”

Debutant Matt Brabham managed to avoid finishing his first session at the back of the field, the shock LD Motorsport signing edging Simona de Silvestro in the Nissan.