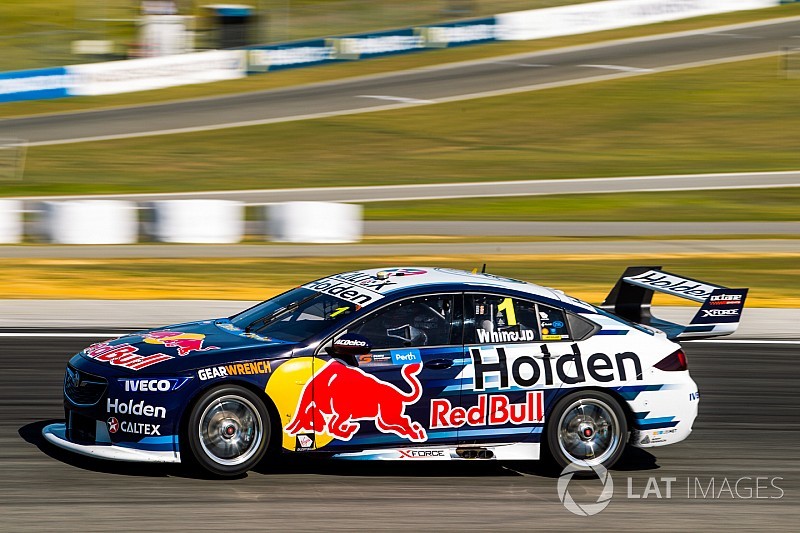 Jamie Whincup topped a frantic wet-dry final practice session at Barbagallo Raceway, while Scott McLaughlin will have to go the long way in qualifying after missing an automatic Q2 spot.

Morning showers meant damp conditions to start the 20-minute session, with times hanging around 61-second mark early on as most of the field circulated on wet tyres.

Six minutes in Tim Blanchard dropped into the 60-second bracket on a slick tyre, sparking a mass change to the dry weather rubber.

The first half-representative time came right at the midway point of the session, Nick Percat going top with a 57.916s, before improving to a 56.912s two minutes later.

His Brad Jones Racing teammate Tim Slade was next to have a stint on top thanks to a 56.855s, although he was quickly displaced by rookie Anton De Pasquale's 56.833s with just under seven minutes to go.

With five minutes to go McLaughlin made his move, going from the bottom of the field to a top with a 56.619s.

The next change came at the beginning of the 'Happy Hour', Rick Kelly first to take on a last-gasp green tyre run with a 56.222s with three minutes to go.

Shane van Gisbergen then went from outside the Top 20 to top spot with a 55.331s on his green run, before being replaced by teammate Whincup – who was dead last – with a 55.268s.

That proved to be the hammer blow, Whincup ending the session 0.04s clear of Chaz Mostert.

Will Davison improved on his final run to slot into third, which dropped van Gisbergen back to fourth.

Kelly, who had been top with three minutes to go, was shuffled all the way to the back of the field due to the flurry of late times, before jumping back to eighth on his final run.

Andre Heimgartner made it two Nissans in the Top 10 with the ninth quickest time, while James Golding grabbed the final automatic Q2 spot.

That meant McLaughlin missed out on Q2, yesterday's polesitter and race winner finishing 12th after initially being bumped out of the Top 10 by Golding's time.

"We didn't run greens, I don't know whether other people did or not," said McLaughlin. "Maybe we got caught out by that. I had a fair bit of push then, too.

"I'm confident we can come through on the three runs, but we just missed the boat there. You always want to be in Q2, but we didn't run the green set, so at least we've got a set of tyres up our sleeve. It's okay. We've just got one extra qualifying session we've got to get through."

McLaughlin isn't the only big name that will have to come through Q1 today. Mark Winterbottom, who finished second yesterday, was just 19th, and didn't even have tyre condition to blame.

The Walkinshaw Andretti United duo were even worse off, James Courtney and Scott Pye finishing up 25th and 26th respectively.

"To be honest I thought it was okay with the way the tyre was, what we had," explained Courtney. "It was good in the wet, we were up there. But then at the end there when everyone put on their better sets, their better sets were obviously better than ours.