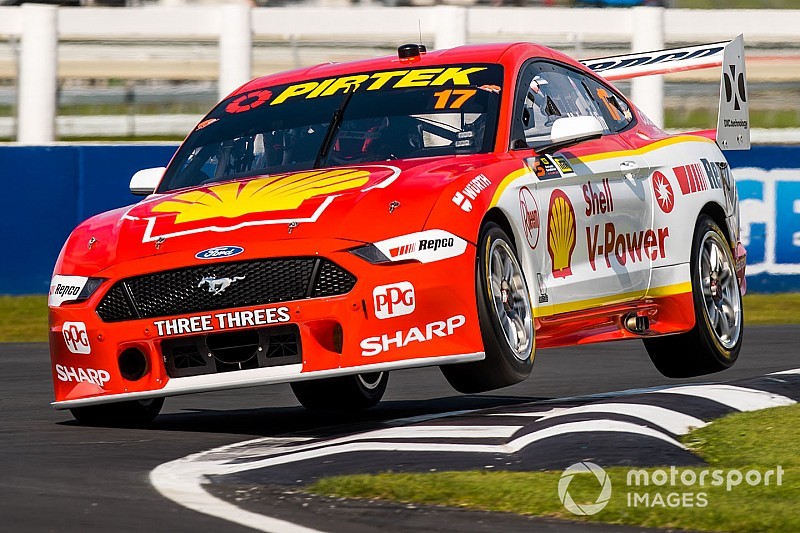 Scott McLaughlin emerged from Safety Car-induced chaos to claim a record-breaking 17th win of the Supercars season at Pukekohe.

The win makes the DJR Team Penske driver the outright record holder of most victories in a single season, McLaughlin having equalled Craig Lowndes' existing benchmark last time out at The Bend.

However, through no fault of the Kiwi himself, the win is shrouded in controversy.

The deployment of the Safety Car on Lap 13 kick-started a complicated chain of events that took early front-runners Jamie Whincup, Lee Holdsworth, Fabian Coulthard and Cam Waters all out of contention.

Strategies were split from the word go, Holdsworth and Coulthard pitting from second and third on Lap 5, followed by Waters, who inherited second, a lap later.

Leader Whincup opted to run deeper into the first stint, not pitting until he hit lapped traffic on Lap 12.

The Triple Eight driver emerged ahead of Holdsworth, Waters and Coulthard, moments before the race took a controversial turn.

Whincup then illegally passed the Safety Car to try and rectify the issue, while Holdsworth, Waters and Coulthard chose to stay put.

That opened the door for an entire train of cars that pitted during the caution to get back out ahead of Holdsworth but behind Whincup, a problem compounded when the Safety Car then waved the trio of Mustangs past and picked up Whincup for a second time.

Suddenly Holdsworth was sitting 11th, ahead of Waters and Coulthard, while Whincup was out front followed by McLaughlin and Shane van Gisbergen.

Shortly after the Lap 18 restart Whincup was penalised for his part in the debacle, a drive-through penalty handing the lead to McLaughlin.

That was little consolation for the other three would-be front-runners, Holdsworth, Waters and Coulthard all resigned to an afternoon in the midfield.

He covered off any threat of a van Gisbergen challenge by pitting on Lap 40, a lap later than the Red Bull Holden, resuming with a 3s lead.

Van Gisbergen did make some in-roads late in the race, but ultimately fell 1.8s short of running down his fellow Kiwi.

“I completely forgot about [the record]," said McLaughlin.

"I wanted so badly to do this on New Zealand soil. I’m a lucky guy driving a cool car and just a proud New Zealander trying to do my thing.”

“I thought with 20 laps to go as well we were safe in second, [engineer Grant McPherson] told me the points were safe and I thought ‘I can cruise and collect or I can fight like Jason would’," said an emotional van Gisbergen.

"Man I just stood on it until the end. I knew I was never going to get to Scotty or pass him, but s**t I gave it a go.

"Pretty awesome to have a great weekend like this, support for us has been awesome.

“I had an awesome weekend and our cars are really good now. Looking forward to Bathurst and hopefully we can have a go there.”

Chaz Mostert came home third, holding off a spirited challenge from Nick Percat in the closing stages. The BJR Holden driver had made his second stop 15 laps later than Mostert, and almost used his superior tyre quality to snatch a podium.

The gap between the two was just half a second at the flag.

The chaos helped some drivers to career-best finishes, with Todd Hazelwood in fifth and Simona de Silvestro in eighth.

Those two were split by Mark Winterbottom and Scott Pye, while Garry Rogers Motorsport pair Richie Stanaway and James Golding rounded out the Top 10.

Whincup slams race control: "The brain's not with it"