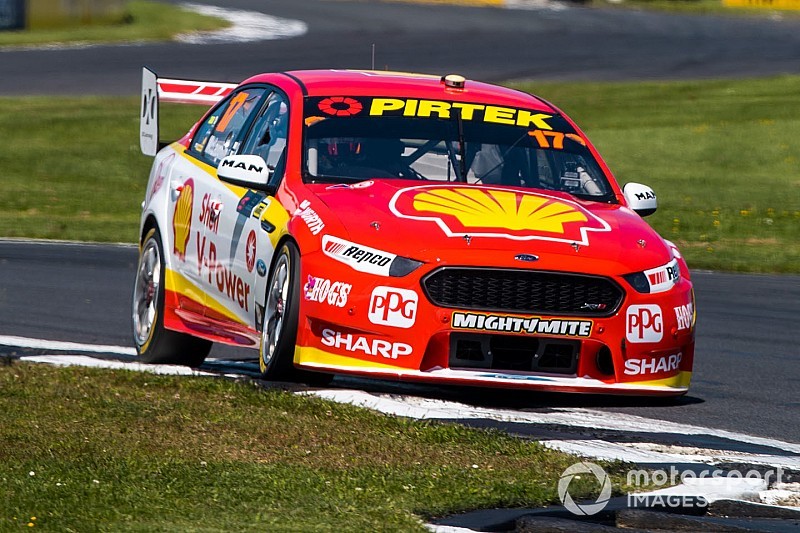 Scott McLaughlin capped off a drama-filled weekend at Pukekohe with a solid race win, while Triple Eight swapped its lead drivers to hand second to Shane van Gisbergen.

The Penske driver emerged in the lead after the second round of stops in the 200-kayer, controlling the final stint to take a well-crafted win over the two Red Bull Holdens.

It means he takes out the Jason Richards Trophy for the first time.

“That’s pretty awesome [to win the Jason Richards Trophy]. For a Kiwi to win it again is very special.”

While the final gap was 12s, it would have been much closer had it not been for some late team orders from Triple Eight.

With Shane van Gisbergen recovering from a pitstop blunder early in the race, the team ordered Whincup – McLaughlin's chief rival all afternoon – to slow down and hand second place over to title contender van Gisbergen.

McLaughlin and van Gisbergen are now split by 14 points heading to the season finale in Newcastle later this month.

Polesitter Whincup led the very early stages of the race, before being dragged in for his first stop on Lap 5.

That left McLaughlin out front, the Penske driver holding a 2s advantage over van Gisbergen until he pitted on Lap 13.

Van Gisbergen followed suit two laps later, however his stop was compromised by a safety stand being left under the car following a ride height change. It meant the car had to be lifted back up by the air jacks so the stand could be retrieved, the additional time meaning he dropped from second to eighth.

With an undercut from his early stop, Whincup found himself with a 4s lead at the start of the second stint. He was able to sustain it, too, McLaughlin failing to make any real headway.

Van Gisbergen, meanwhile, got back to sixth on the road before the second round of stops started, with a 20-odd second deficit to his teammate out front.

On Lap 34 Whincup made his second stop, McLaughlin doing likewise four laps later. That led to briefly fierce battle for the effective lead, McLaughlin emerging from his stop right ahead of Whincup.

Having held off the Triple Eight Holden until his tyres came up to temperature, McLaughlin settled into a lead of just over a second for the run to the flag.

Van Gisbergen went deep into his second stint, not making another stop until Lap 47. He popped back out in fifth, just in front of Chaz Mostert and with a 4s gap to Craig Lowndes in front of him.

It took 10 laps for van Gisbergen to catch and easily pass his T8 teammate, before closing right up on the back of David Reynolds in third. On Lap 60 he then completed the comeback to the podium, passing the Erebus Holden to move into third.

That left van Gisbergen 11s behind Whincup, who was still just 1s behind leader McLaughlin. That left Triple Eight with two options – let Whincup try and pass McLaughlin to limit the points gain over van Gisbergen, or back the #1 car off and hand second – and the nine points – over to the #97.

With a change in the lead potentially yielding a three-point advantage for van Gisbergen, T8 initially let Whincup carry on. He got within half a second in what was a thrilling conclusion to the race, but couldn't quite get the job done.

As a result, he was told to slow down on the final lap to let van Gisbergen through to second place.

"I thought we had him, four seconds up the road and I think we only had one second less of fuel, but they jumped us in the stop," said Whincup.

“I did everything I could, but happy to have a double podium [for the team] today.”

Lowndes made it a T8 two-three-four, with Reynolds dropping back to fifth.

Mark Winterbottom was the first Tickford Ford home in ninth, with Nick Percat rounding out the Top 10 after a spirited battle with Cam Waters that included contact through the fast complex onto the main straight midway through the race.

No legal action from DJR Team Penske after failed protest