Confusion, anger, allegations, finger-pointing – the Safety Car debacle at Pukekohe had it all. We attempt to unravel the controversy.

When Jamie Whincup is referencing race control and red wine in the same breath, and Cam Waters is asking for Supercars to strip a race of its points, you know something major has gone down.

For the second year in a row, the pressure cooker that is Pukekohe provided high drama between teams and officials.

Last time it was wheel spinning, this time it was the Safety Car. The deployment of a full-course caution on Lap 13 led to chaos last Sunday afternoon.

Could the chaos have been avoided?

Let's start with what actually happened

Having made earlier stops, Whincup, Holdsworth, Waters and Coulthard all came across the Safety Car with its orange lights illuminated.

At that point Whincup was the effective leader, heading the pack that had already stopped.

However he technically wasn't the race leader. That was Scott McLaughlin, who was at the front of a train of cars that was immediately pitlane-bound once the Safety Car was called.

And, given the short lap time and long pit exit at Pukekohe, that train was the best part of a lap ahead.

Concerned that sitting behind the Safety Car would allow that lead group to get a free stop and retain track position, Whincup disobeyed the lights and took off into the distance.

That meant he cleared the train of cars now exiting pitlane and took over as the actual race leader, while Holdsworth, Waters and Coulthard ended up at the back of that train, still sitting being the Safety Car.

The Safety Car then waved that group through and picked up Whincup for a second time, now as the race leader, leaving the others he had been racing early in the first stint at both a track position and fuel disadvantage.

Whincup was later penalised, very rightly, for not playing the whistle, even though he thought the umpire was wrong.

So how could it have played out differently?

What would have happened if Whincup had obeyed the Safety Car lights and stayed put?

Even working on the assumption that the lead pack would have pitted and returned to the track before the slow-moving pack had made it back to the Safety Car 2 line, the Whincup/Holdsworth/Waters pack would have continued to be first in the queue... at least initially.

The order would have been right – those that pitted early at the front – but the cars right behind them would have been the best part of a lap ahead, having just had a free stop.

It's worth noting that, while it created an almighty mess, there was nothing unlawful about the Safety Car having its orange lights on when it did.

The competitor briefing notes clearly state: 'In some circumstances the SC may be deployed and hold the first approaching car, then at the appropriate time any cars between the SC and the leader will be waved through'.

Stuart and Schenken are adamant they could have corrected the order had Whincup held station. It wouldn't have been impossible, but boy it would have been tricky.

Any other resolution, such as waving the group that had stopped through, would have put the lead pack all a lap down.

Scenario 2: The green lights were on

Had Whincup et al come across the Safety Car with its green lights on, it would have been a much different outcome.

They would have been able to carry on quickly enough to beat those in the pitlane to the crucial Safety Car 2 line, and then file back in behind the Safety Car the next time around.

Their races would have still been hugely compromised by the very presence of the Safety Car, with the likes of Mclaughlin, van Gisbergen and Mostert all right in the lead pack, but with a lot more fuel on-board.

But at the very least the early leaders would have only been at a fuel disadvantage, not a fuel and track position disadvantage.

The door, therefore, would have been open to try and sprint once the race went green and build a big enough gap to negate the fuel difference.

A long shot, maybe, but better than what they were ultimately left with.

Circling back to what actually happened, simply stating that the Safety Car should have picked up actual race leader McLaughlin is an oversimplification.

It's impossible to 'pick up' a car that sitting in pitlane on its jacks copping a belly full of fuel.

Whincup should have been the man parked behind that Vodafone Mustang during the caution... just not quite that quickly.

It seems the Safety Car picked up the right lead group at the wrong time. 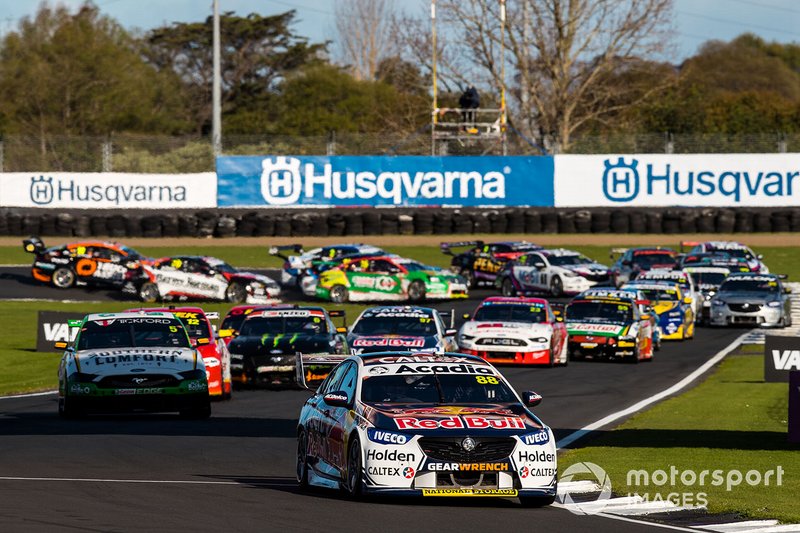