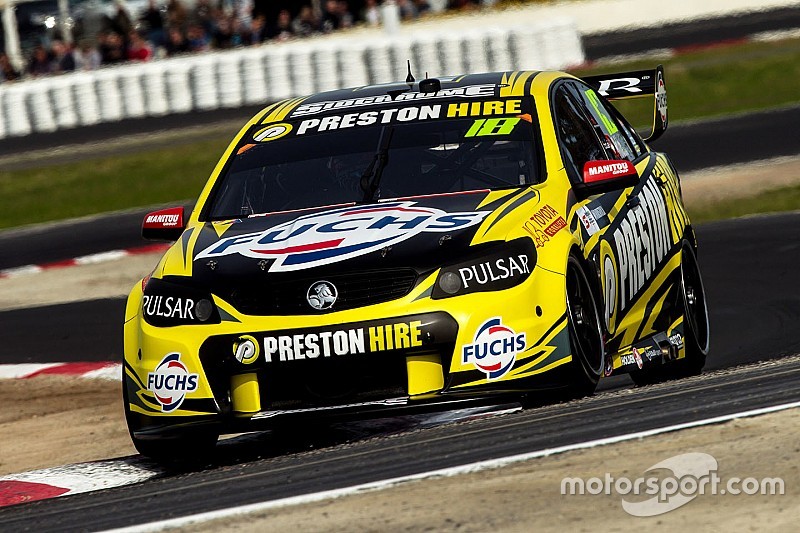 Team 18’s endurance driver Karl Reindler has been thrown in the deep end for the next two V8 Supercars rounds, after being given the call-up to replace the injured Lee Holdsworth. He spoke to Andrew van Leeuwen.

KARL REINDLER: Yeah, absolutely. The team have been great; they were in touch as soon as Lee had the accident, to let me know what was going on.

They knew he had some pretty bad injuries. Initially they thought it was a broken leg, and they weren’t far off.

So the team has been great. Jeff Grech particularly so, because he’s been in the situation before when Craig Lowndes had his big rollover at Calder back in 1999. It’s been a long time for him, but he’s know stranger to this sort of situation.

It’s an awful situation, but you’ve kind of got to make the best of what it is.

Now you’ve been thrown in the deep end, what do you need to do between now and Townsville in terms of preparation?

I’m just treating it like any other round. The reality is that I haven’t had the sort of miles that the rest of the guys in the field have had this year. I’m going to catch with up [engineer] Jason Bush this afternoon for a pre-brief, to come up with a bit of a plan for the weekend.

You know… there are a few reasons that the team opted to put me in the car. Firstly, it makes sense to give me some extra miles prior to the enduros. And I’m already familiar with the crew, the car, the engineering direction, and the philosophies that the team are working to, because I’ve been at nearly every round. I’m one of the team members, and I’ve been embraced as a team member ever since I put pen to paper.

The other reason is that I’ve got nothing to prove, mate. I know my position; I’m stoked to be part of the team, and my focus is still on the enduros. I want Lee back in the car sooner rather than later; it’s in my best interest that he’s match fit. You never complain when you get a chance to drive, but big picture, it’s better for me if he’s in the car.

How well do you know the Townsville circuit?

It’s a physical race, not as physical as Clipsal or Homebush, but still hard work.

But fitness has never been a huge issue for you, right?

Well… it’s a different sort of fitness. You can do what you like out of the car, and I do a lot of work on the bike and in the gym, but you can’t replace race miles.

I feel ready, and I’m looking forward to the challenge, but it won’t be easy. It’s going to be hot up there, and obviously I’m not used to the heat because I’ve spent the last few months down here in Melbourne.

It is what it is. I know what’s coming, I know what to expect. It will be challenging, but there’s nothing wrong with a challenge.

How have you found the Triple Eight-built car to drive?

I’m happy. The way Lee drives the car, the way I drive the car, and the way Triple Eight recommends the car should be driven is all pretty similar.

There’s just so much to learn when you have a new car. We have Triple Eight to bounce off, but it’s a tough one; you want to go about it your own way and do your own thing, but you also have this other information available. It was very helpful having David Cauchi and Jamie Whincup down at Winton. I don’t think we discovered anything incredible, it just confirmed to us that we were on the right track.

The circumstances aren’t great, but have you made a bit of time for yourself to be excited about the next few months? I mean, at least two sprint rounds and then the enduros, you’ve got a lot of racing coming up…

I’ve had a lot of people call and message me to say ‘congratulations’, which I appreciate but I don’t feel like I should be congratulated. This is just what you do for the team. They’ve looked after me, and this is me returning the favour.

Personally, I’ve got nothing to gain by being out there. I’ve done the main series thing, and I have no intention of going back to doing it full-time. I really enjoy the co-driver role, coming in for those weekends and being part of a bigger operation.

Of course it’s great to get behind the wheel. I love what I do, I love racing, and I love the intensity of V8 Supercars. But, you know, my goal is to just solidify myself as a really good co-driver that people want to have on their team, so I can continue doing that for as long as I can.

Hopefully what comes out of this is that Lee is fighting fit for Sandown, and the extra miles I will have had before then will put is in good stead for the three endurance races.

Words with Cam Waters: Tough weekend in the Top End

McLaughlin to join Penske in 2017