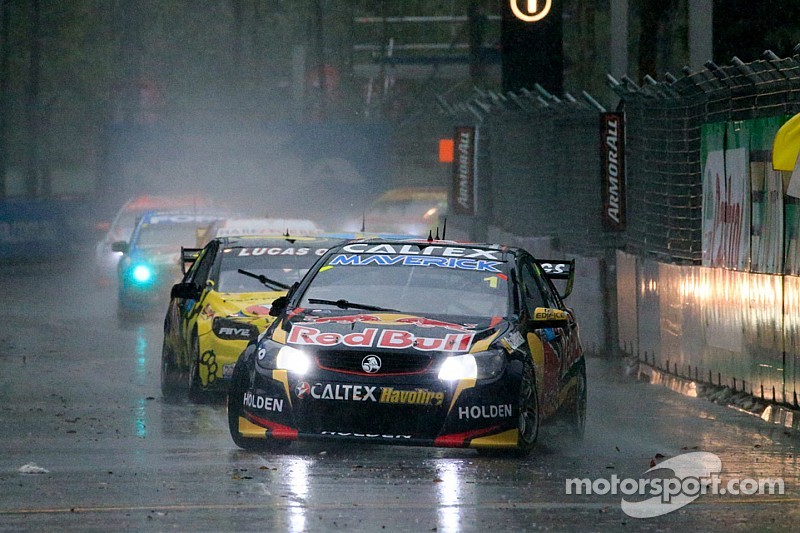 The downpour was just too severe for officials to allow the race to continue.

Newy crowned six-time champion Jamie Whincup played his cards right and was in the front when the rain came pouring down in Sydney.

The second race of the final V8 Supercars event of 2014 became wet and wild and soon, stopped. The rain, which had been building since earlier today, came down in droves which led to the eventual call from race control to close the event out early.

Although Team BOC driver, Jason Bright started off on pole position, it was the champion-elect, Jamie Whincup, who once again stormed through to take the lead on Turn One. This was a bit of a shocker to many considering the fact that Whincup started in fourth. Due to some costly wheel spin by Bright, however, the move by Whincup came relatively unopposed, albeit a slight knock from Scott McLaughlin.

From there, the six-time champion stormed away and by the time lap eight rolled around, had developed over a five-second lead over the rest of the field.

The clouds rolled in and the track darkened as headlights began coming on. As the skies opened up and released its bounty, rivers and lakes began forming in the roads of Sydney. Being known for its many rises, drops, and overall bumpy conditions, these soon became filled with so much standing water that Ford Performance Racing (FPR) driver, David Reynolds, said he was going to call Noah because there was the only way they were going to get back on the track.

Although the cars were eventually led back onto the track under the control of the safety car, this was done simply to complete the minimum number of required laps to make the race official. Once completed, Whincup was awarded with the victory, followed by Shane van Gisbergen and Scott McLaughlin.

Before the rain came down, the #66 Xbox Ford Falcon driven by Marcos Ambrose didn’t have the smoothest of starts. As the cars raced toward Turn One at the start of the event, Craig Lowndes came together with Ambrose which caused the latter to spin out.

Once recovered, however, Ambrose began pumping out lap times which were only .3 seconds off of Whincup’s times.

It was a smart move by race control to cut the race short. With one final race scheduled for tomorrow, however, the weather looks clear and the expectations are high for many drivers. SVG’s podium finish moves him up to third in the championship and he is now eyeing Mark Winterbottom’s spot in second. Regardless, one can fully expect the final event of the 214 season to be one worth remembering.