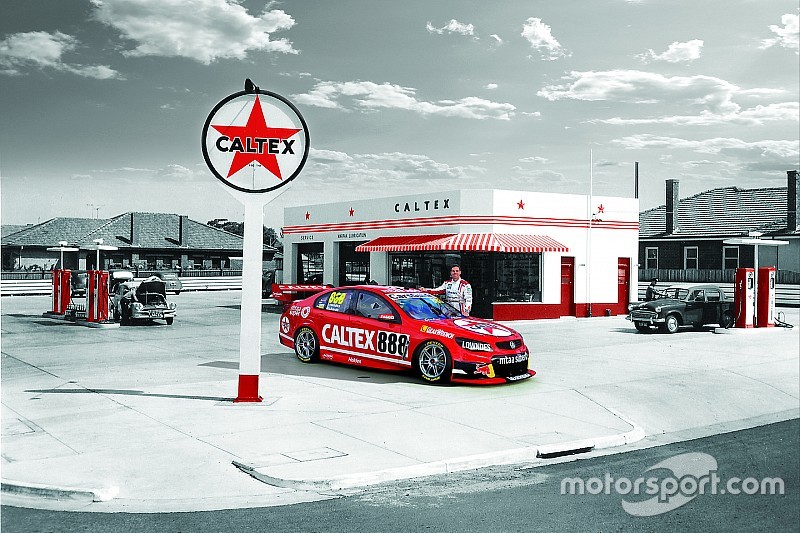 The Sandown 500 retro colours have been revealed for Craig Lowndes and the two DJR Team Penske drivers.

For the Lowndes/Steve Richards car, Triple Eight has gone for an early-1990s-inspired look, switching from Vortex branding to retro Caltex colours.

“It’s great to be sporting a new livery ahead of the retro round at Sandown Raceway,” said Lowndes.

“This year is the 47th time Sandown Raceway has hosted a Touring Car or Supercars event, which is more than any other venue and, from what I hear, it seems that everyone is really getting into the spirit of it and it is a great way to celebrate the raceway and its heritage.

“I’m really looking forward to [Steven Richards] getting back into the car and seeing what we can do at the enduros this year. Our Bathurst win last year definitely gives us a bit of confidence, but you never know what’s going to happen in these long races.”

DJR Team Penske, meanwhile, has gone for a split retro livery concept, with one car paying tribute to the team’s American roots, and the other its Australian history.

Fabian Coulthard and Luke Youlden’s Ford will run in blue and yellow, and don number 66 as a tribute to Mark Donohue winning the ’72 Indy 500 in Roger Penske’s Sunoco Special McLaren. The retro look will be paired with contemporary sponsor MightyMite.

“It marks a very special point in the history of the team as it was Roger’s first Indy 500 win with a truly legendary driver in Mark Donohue, who to this day remains the team’s winningest driver across multiple disciplines. Donohue was a ‘renaissance man’ and it’s a great privilege and honour to celebrate his ’72 victory and Team Penske’s 50th anniversary with this livery.”

The #17 car will run Shell colours, Scott Pye and Tony D’Alberto to race in a livery inspired by the 2003 Dick Johnson Racing Fords.

“In recent years we have rolled out a number of retro liveries at Bathurst,” Dick Johnson added.

“But there is no doubt that the Shell designs are the ones that really relate to the fans. This one was special as Steve [Johnson] and I worked closely with the designers to come up with something quite different. We had run the red Shell Sierras and mostly yellow Falcons previously, so the 2003 Shell Helix design was something we wanted to really stand out.

“It will be great to see it out on track again.”