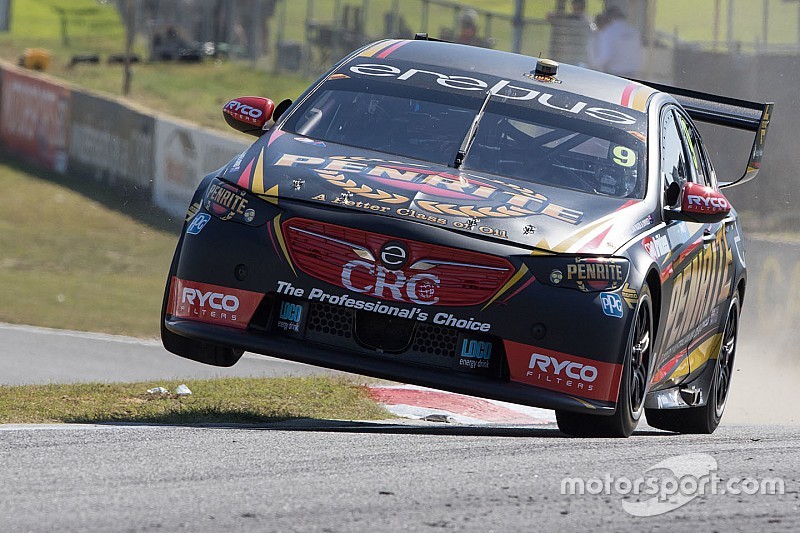 David Reynolds has explained the self-proclaimed "dick move" at the final corner that almost cost him an important podium in Perth this afternoon.

The Supercars title contender almost did his points account significant damage when he ran wide at the final corner on the final lap of the race.

The unnecessary trip through the deep sand went seriously close to costing Reynolds his second place, the Erebus driver lucky to avoid getting bogged and then get to the control line ahead of third-placed Craig Lowndes.

Speaking to TV crews after the race, Reynolds explained that a mixture of running on the dirty line through Turn 6 and a momentary lapse in concentration caused the bizarre last-lap off.

"The real reason is I just did a complete dick move," said Reynolds.

"I'd just passed two back markers around the outside of the second-last corner, and I must have had some shit on my tyres. I went down [to Turn 7] and I wasn't half concentrating, and I locked a brake.

"I was like 'no, no, shit'. I went through the sand and I thought 'I hope I don't lose it completely.'

"Luckily I just got back on and finished second. You can't have a great race without blaming something..."

While able to explain his blunder, Reynolds is at a loss to explain how he didn't actually win the race.

He reckons he thought he'd be closer to race winner Scott McLaughlin after the second round of stops, which played its role in Reynolds not quite being able to run the Kiwi down at the end of the race.

"I thought we were going to win in the first stint, because my car was looking after its tyres well," said Reynolds. "Everyone seemed to have pitted and I stayed out five or six laps longer, I was going to come home really strong.

"But in the second stint McLaughlin had this massive gap, and we've got to figure out how and why. Maybe he just had a perfect run in the pits and good car pace.

"At the end I was hunting him down and with about five to go it stabilised.

"Like I said, it was pretty much a perfect race up until the last corner. So we've got to figure out where and how and why McLaughlin ended up with that big gap."