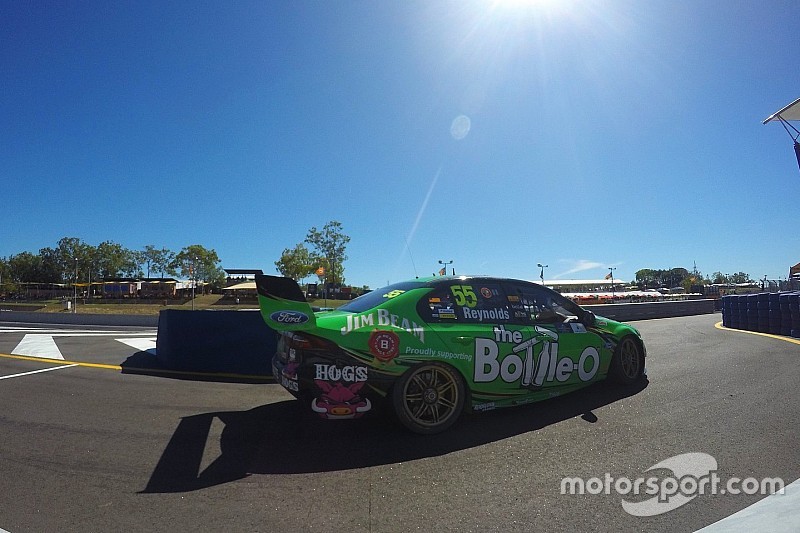 David Reynolds took his first V8 Supercars race win of the year, despite an off-track excursion at a crucial point in the 200-kilometre race.

While Reynolds started from pole, it was Fabian Coulthard who led the way early after making the best of the start. But on Lap 12 it all changed, Coulthard running wide while dealing with lapped traffic, allowing both Reynolds and Prodrive Racing Australia team-mate Chaz Mostert to sneak through.

Reynolds then followed the most popular strategy of the race, pitting for hards and them moving back to the softer compound for a long third and final stint.

While it should have been a straightforward run to the flag after the final stop, Reynolds had a scare on Lap 46 when he ran off the circuit while trying to lap Michael Caruso. Reynolds cut straight across at Turn 5, re-joined the circuit, and just managed to hold on to his lead.

Mostert, running a very similar strategy to Reynolds, was able to shadow the green Falcon in the latter stages of the race but ultimately settled for second.

Coulthard finally had a clean race – apart from his Lap 12 blunder – and was rewarded with third place ahead of Shane van Gisbergen and Mark Winterbottom, all having run the soft-hard-soft stagey.

Craig Lowndes almost pulled off the recovery of the day. Starting from 15th, the veteran went for a short middle stint, pitting on Lap 20 to go from softs to hards, and then straight back to the softs just nine laps later.

That, combined with a dynamite start to his third stint, saw Lowndes clear the midfield and find his way into the leading pack, putting him in a position to nab an unlikely podium.

But on Lap 54 he had to make a third tour down pitlane, re-fitting the hard tyres when his right front started to delaminate. He ended up right where started, down in 15th.

Unfortunately for Triple Eight, Jamie Whincup had a similar problem in the #1 Commodore.

Whincup took the biggest strategic gamble of anyone, trying to run a single set of soft tyres for the entire race. Starting from 12th, Triple Eight chose to pit Whincup on Lap 2, getting him out of traffic and giving him a splash of fuel.

By the time he stopped again on Lap 30, he had been running well inside the Top 10 and only 13s off the lead. Rather than swapping rubber, the team elected to rotate them back-to-front and side-to-side, with Whincup then driving the rubber right until the end of the race.

While the cunning strategy put him in the game, it all fell apart on Lap 46 when his right front delaminated, forcing him to make a third stop and take on a full set of hards. He wound up finishing a lowly 22nd.

Scott McLaughlin was the best Volvo in 11th, despite an off early in the race. Only he and his team-mate David Wall chose to start on the hard tyres, which gave him better softs later in the race.