Young gun Rick Kelly, driving the K-Mart Holden Commodore became the youngest driver to win a round of the V8 Supercar Championship. At 21 years of age, he showed that his win last year with team mate Greg Murphy at the Bathurst enduro was no ...

Young gun Rick Kelly, driving the K-Mart Holden Commodore became the youngest driver to win a round of the V8 Supercar Championship. At 21 years of age, he showed that his win last year with team mate Greg Murphy at the Bathurst enduro was no fluke, although it would have been interesting to see him battle it to the end with Craig Lowndes had the 77 lap rain soaked race at Eastern Creek not been cut short 10 laps by officials after several drivers and teams alike claimed that the circuit was becoming "very dangerous". 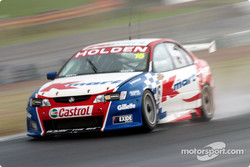 Rick Kelly in action.
Photo by John Maricic.
With Kelly starting in the middle of the pack of the 32 field, it looked as though defending champion Marcos Ambrose was going to produce a repeat performance of last years final and walk away with the points after he again grabbed pole position during Saturdays Top Ten shoot out in his Pirtek Ford.

But that was not the case after he made an uncustomary excursion off the track on lap 50 after surrendering the lead to Mark Skaife who pressured him from the start, forcing Ambrose back to 7th. This cost him the lead in the championship and he now trails Steven Richards in the Castrol Commodore.

Despite Ambrose's Stone Bros team mate Russell Ingall dominating practice on Friday and Saturday in the Caltex Havoline Ford, veteran John Bowe topped the time sheets in qualifying in the afternoon session. Unfortunately this was undone when he had to settle for 10th spot on the grid after running wide at the treacherous turn 1 in the shoot out. Bowe's problems didn't finish there, the OzEmail driver spun at turn 8 after a dozen laps, forcing him to the back of the field when he looked threatening. Steven Ellery was another casualty, along with Kiwi Jason Richards who both had run their races.

The highlight of the afternoon was undoubtedly the battle waged between Craig Lowndes in the CAT Ford Performance Racing Ford and Garth Tander in the Valvoline Holden Commodore, with both drivers giving it their best. In the end Lowndes came out on top. He has made a habit of performing in the rain, just look back to Phillip Island and Eastern Creek last year. Tander was later excited when at the press conference he said, "This weekend we (Garry Rogers Motorsport Team) would never have thought of finishing on the podium, but with the rain we went better and better". 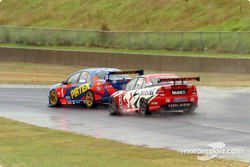 Mark Skaife pressing Marcos Ambrose.
Photo by John Maricic.
Apart from Ambrose, the driver expected to finish on the podium was HRT pilot Mark Skaife, who has claimed this circuit as his own in the past. After hunting down Ambrose and passing him, Skaife later ran off the track twice, once hitting the wall, finishing the race in 22nd position.

With a revised point system this year, drivers will have to finish in the top ten spots in each race to have any chance of having a crack at the title. Unlike last year they could afford to drop their worst round. This year, it's a whole different ball game with consistency being the key. In saying that, perhaps Steven Richards looks the favourite at this stage, finishing a credible 4th and taking the lead in the series, although there is plenty of racing ahead.

Apart from the weather, the only other bad news over the weekend was the announcement by AVESCO chairman, Tony Cochrane, that the championship was not heading to China for round 12, and has now been postponed to June, 2005. Although the time of the year (November) was suggested as being one of the reasons, there are obviously other logistics to be thrashed out. As to who will now host the round is anyone's guess, despite speculation that Phillip Island is the obvious choice, and one of three options. Talk of expanding to have a second round in New Zealand by 2006 and consideration of other overseas destinations like Dubai and Singapore in the future sees the V8 Supercar series growing from strength to strength.