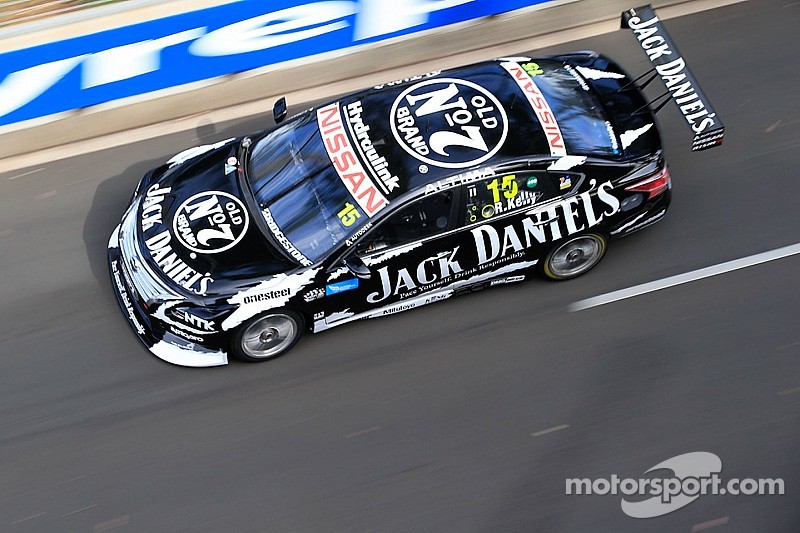 Rick Kelly has continued his strong end of season form, claiming a fifth place in the opening race of the Sydney NRMA 500 on the streets of Sydney Olympic Park today.

After qualifying seventh, the #15 Jack Daniel’s Nissan Altima used strong car pace to elevate himself up the order, and held station to the chequered flag despite heavy pressure from Shane van Gisbergen.

For the other Nissan Motorsport entries, James Moffat finished 14th, while Michael Caruso and Todd Kelly both suffered from brake problems. Caruso came home 22ndand Kelly failed to finish after an incident with Scott Pye.

The second race was hampered by extreme wet weather. The race was red flagged after 18 laps and restarted sometime later to reach the 23 lap mark.

The final day of on track action for the season is scheduled to feature a 20 minute long qualifying session, a top-ten shootout and 250km long race.

"It was great to run fifth in that race, we had a really solid car," said Rick Kelly.

"We were lucky in that first qualifying with the red flag, not many people got a chance to put a lap in, but with our strategy we did, we went a bit early assuming there might be a red flag.

"It was good for something to go to plan like that, and that race was great.

"We also got off to a good start in the second race, we got up to 11th and had pace on a couple of cars in front.

"Somehow in that pit debacle we lost a few positions, and then the rain came down.

"It was a good thing that didn't continue, as it was a little bit too sketchy."

“The conditions in the second race were diabolical – the officials made the right call to make sure we didn’t race,” said James Moffat.

“We made up some spots in the first race but our low starting position meant we were only good enough for 14th.

“In the second race, we were trucking along OK, but there was some confusion in pit lane and I lost a bunch of spots. None of that mattered anyway as they effectively called the race off.”

“To be honest, we were very lucky today. We tripped over ourselves with the front brakes drama,” said Michael Caruso.

“I had to bring the car home with rear brakes only which was very difficult.

“The boys had to work hard to fix the car and the did a very good job.

“What can you say about the second race? I think V8 Supercars did a really good thing – there was no way those conditions were suitable for racing. They took safety first over entertainment, so they need to be commended for that.”

"It's one of those days that we have had far too many of unfortunately," said Todd Kelly.

"We had pretty good pace and a pretty good car in that first race, we were trucking along not too bad there.

"Then we had a brake failure, the pedal went straight to the floor which hindered that race.

"Again we had pretty good speed in that last race, we were hanging in there, and then when the rain came we messed up our strategy and went straight to the back.

"As it turned out, the race got cancelled anyway.

"Hopefully we have a nice clean day tomorrow, and get the potential out of the car that we should have."