The Supercars rule that can't be enforced 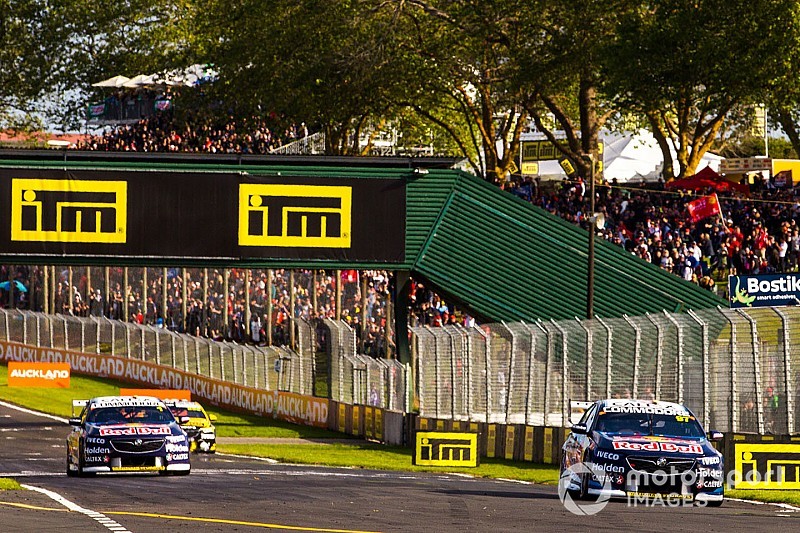 A little over a week ago, Triple Eight was facing a sensitive situation.

There was a handful of laps left in Sunday's race in New Zealand, and Scott McLaughlin was narrowly leading over Jamie Whincup. Shane van Gisbergen, the man fighting McLaughlin for the title, was 11s behind in third.

The best outcome would have been Whincup passing McLaughlin, the points gap between second and third just nine points while first to second is 12 points.

The only unacceptable outcome was a two-position difference between McLaughlin and van Gisbergen.

Technically speaking, team orders are prohibited in Supercars, the rule book banning "an instruction to a driver or team member... which may interfere with the race result".

Between the rule, the hope that Whincup might sneak past McLaughlin, and the 11s gap back to van Gisbergen, it was all a little complicated.

Whincup's final lap was more than 12s slower than the lap before, allowing van Gisbergen to just nip over the line in second place.

The team played along nicely after the race too. As the two cars crossed the line, Whincup's race engineer David Cauchi made an effort to look, puzzled, at the display on the fuel rig in the garage.

Team Manager Mark Dutton did his best to give the fuel concerns some credibility, referencing that the team didn't dot its I's and cross its T's well enough post-race. But the idea that stopping four laps earlier than McLaughlin would make such a dramatic difference at the other end was all too convenient... particularly as the supposed short fall meant he had to slow down by the exact margin required for van Gisbergen to nip past.

DJR Team Penske were in no doubt what had happened. The very second that Whincup started to fall back on the final lap, McLaughin's engineer Ludo Lacroix was on the radio. "Jamie is out. Jamie is backing out of it. They are going to let past Gizzy on the last lap in front of Jamie. But that's all good."

Afterwards, McLaughlin acknowledged the switch and admitted that DJRTP would have probably done exactly the same thing.

"I expected it," said McLaughlin. "I didn't actually know where Shane was, so I knew he was probably in third when Jamie backed off a bit. It is what it is, and I think we probably would have done the same."

Given how sour the relationship between the two teams has become, with protests and park-ins adding to the dramatic battle for the title over the NZ weekend, it seems odd that such a blatant moment of team orders would be given a free pass by the Shell outfit.

Perhaps, it's an ace that Penske wants to keep up its sleeve as McLaughlin looks to protect his 14-point lead in Newcastle later this month.

However it's more likely that the DJRTP, led by the astute Ryan Story, knows full well that the rule effectively can't be enforced.

There are countless ways to orchestrate a position swap with technically breaching the regulations, from needing to save fuel to wanting to conserve the tyre bank.

And, on a weekend when race control used some leniency in the wheel-spinning case to keep this white hot title fight alive – crucially important to Supercars in terms of TV ratings and column inches – it would have been remarkable for a team orders investigation to have yielded any sort of penalty.

It actually doesn't matter whether Whincup really needed to conserve fuel or not. The bigger issue is that there needs to be a seed of doubt over what happened in the first place.

Perhaps it's time to ditch the rule altogether.

Motorsport is a team game, and should one team be able to manipulate an advantage from having more cars at the classy end of the grid, what's wrong with that?