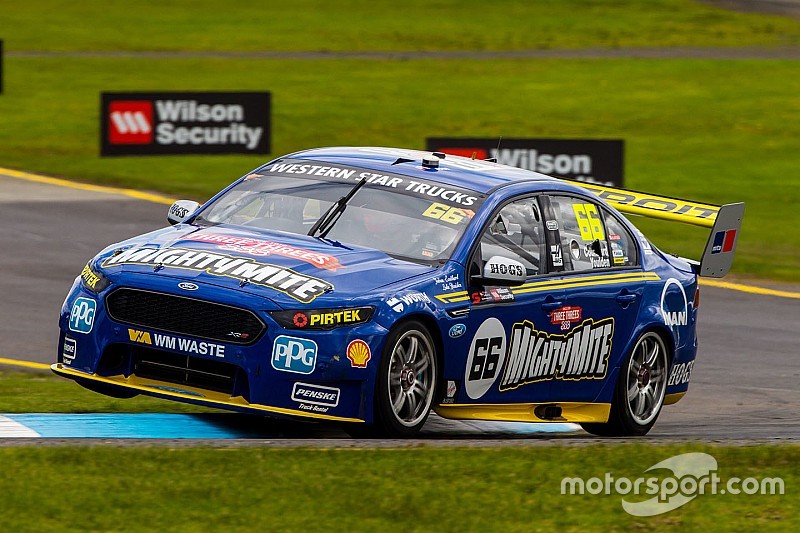 Coulthard, racing in retro colours paying tribute to Penske’s 1972 Indy 500 success, only went fastest on his final run of the 30-minute session. His 1m09.123s right at the flag was good enough to leave him just under a tenth clear of Prodrive’s Chaz Mostert and Triple Eight’s Shane van Gisbergen.

“It’s a good start, I’d much rather be there than down the order,” said Coulthard.

“We’ve worked hard in the last couple of weeks, and we were fortunate enough to have a test day. Hopefully it’s going to put us in good stead for the rest of the weekend.”

Mostert was also a late improver, popping up in P1 seconds before the end of the session before being pipped by Coulthard.

“Our session went really well,” said Mostert. “I’m really surprised we’re at the pointy end. The car felt pretty good out of the gate, we just tuned it a bit. I don’t feel like it’s too far away.”

Van Gisbergen sat there or thereabouts throughout the half-hour, going fastest early, and then reclaiming P1 10 minutes from the end. But his final lap just wasn’t quite enough to leave him top, the Kiwi ending up 0.16s off the pace in P3, around one-hundredth ahead of team-mate and points leader Jamie Whincup.

Andre Heimgartner was the surprise of the session, using a good set of tyres to go fastest minutes from the end. The LD Motorsport driver ultimately wound up fifth, ahead of Erebus’s David Reynolds and Brad Jones Racing’s Tim Slade.

The two Volvos were eighth and ninth, James Moffat leading Scott McLaughlin, with Craig Lowndes rounding out the Top 10.

The two Holden Racing Team Commodores were just 15th and 16th (James Courtney ahead of Garth Tander), while the best-placed Nissan was Michael Caruso in 17th. Title contenders Will Davison (Tekno) and Mark Winterbottom (Prodrive) had a slow start to the weekend too, finishing 22nd and 23rd respectively.