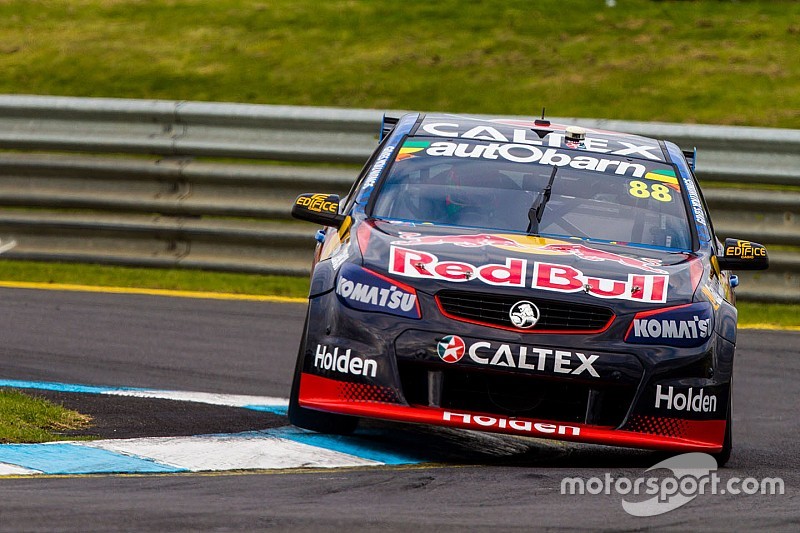 The race was won at the start, Dumbrell making a textbook launch from the front row to jump pole-sitter Steve Owen on the run to the first corner.

From there, Dumbrell controlled the pace across the 20-lap race, finishing with a healthy 7.6s margin.

“It was quite good. Starting on the front row makes it a little bit easier. The car is really good; we struggled a little bit yesterday, but the car is a lot better today.

Owen finished a comfortable second in the #55 Prodrive Ford, failing to match Dumbrell, but comfortably holding off the chasing pack to earn Chaz Mostert a front row start for the second race.

The battle for third was much more keenly contested. Luke Youlden held P3 for 19 of the 20 laps, although the #66 Penske Ford had the #2 Holden Racing Team Commodore of Warren Luff glued to its bumper the entire time.

On the penultimate lap Luff finally made his move, pulling alongside up the back straight before launching into third on the run down to Dandenong Road.

That allowed Jono Webb in the Tekno Commodore to slip through as well, relegating Youlden to fifth at the finish.

“I’m very happy with the car,” said Luff. “That race, it was just watching what Luke’s car was doing, and obviously it was using the tyres.

"We’re all learning as much as we can about the soft tyres for these longer runs. I think we’ve got a good car for tomorrow.”

The two Volvo scrapped hard over sixth, David Wall in the #33 narrowly holding off spirited rookie James Golding in the #34.

Alex Premat made up one spot to finish eighth in the #97 Triple Eight car, with Jack Perkins (#22 HRT Commodore) and Jack Le Brocq (#6 Prodrive Ford) ninth and 10th.

While not denying he made contact with D’Alberto, Canto was left wondering is he’d been hit himself from behind.

“I locked an outside front wheel, which is not normal,” he said. “One of the boys told me it looks like I got tagged from the rear. It was nothing major, but it ended up pretty bad for our car.”

“[I’m] very disappointed,” added D’Alberto. “I actually got a very good start. I tried to give room at Turn 1, and then just copped a hit in the rear, spun me around, my race was done from there. It’s not all lost, the points are for tomorrow.”

The grid for the Sandown 500 will be determined by this afternoon’s second qualifying race, which will feature the primary drivers and start in the same order as the first race finished.