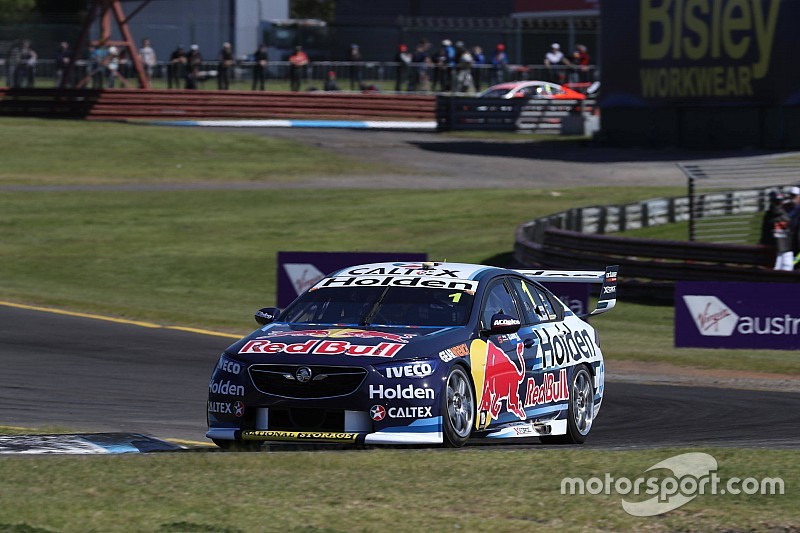 Dumbrell, teaming up with Jamie Whincup for a seventh consecutive enduro season, went fastest just before the half-way mark in the 30-minute session with a 1m07.846s.

At that point the time was seven tenths clear of the field, and even after a flurry of late times it was still good enough to leave Dumbrell more than four tenths faster than anyone else as the session came to an end.

"I think my first flying lap in the Super2 car this morning, I nearly hit the inside fence waiting for the understeer,” he said.

“I was four wheels over the inside kerb, and it’s [normally] hard to get there.

“The surface looks like it’s deteriorated since it’s been resurfaced in [Turns] 1 and 4, but the lap times say something different.”

Nissan Motorsport's Dean Fiore was the best of the rest, a 1m08.278s inside the last minute leaving him second fastest.

Jack Perkins put the #25 Walkinshaw Holden third on his final run, making him the best of the drivers not to have run in the Super2 practice session earlier this morning.

Alex Premat was best of the DJR Team Penske co-drivers in seventh, while Garry Jacobson capped off a decent session for Nissan with eighth in the #15 Altima.

Tickford Racing endured a slow start to the weekend, James Moffat the best of the team's four co-drivers with 13th in the #55 Ford.

Earl Bamber, the least experienced driver in the field in terms of both Supercars laps and Sandown track knowledge, was 14th in the #97 Triple Eight car.

“I’m pretty happy," said the Le Mans winner. "I expected to be further down because I’ve never been here and the field is pretty close.

“The track is wicked. It’s cool to bounce these cars. It’s the first time I’ve attacked a proper kerb with one of them, so it’s good fun.”

The biggest name outside the Top 20 was reigning Bathurst 1000 winner Luke Youlden, who was 21st quickest in the Erebus Holden.