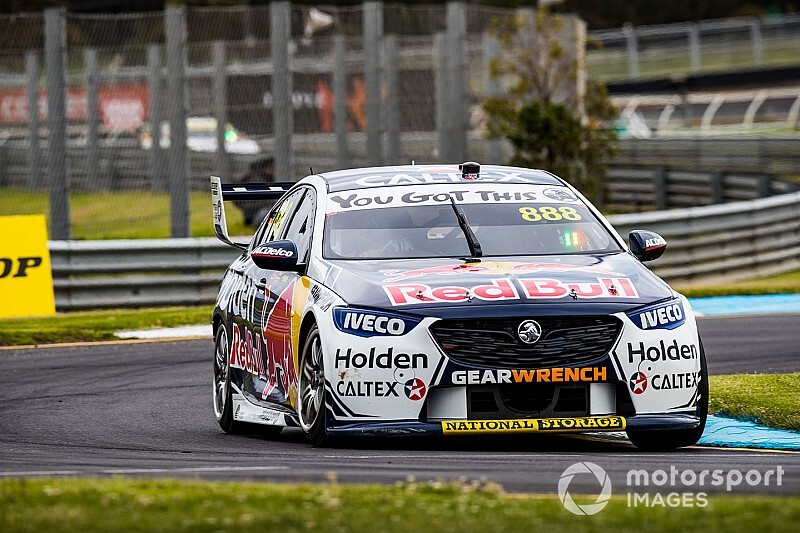 Craig Lowndes took a comfortable win from a chaotic, rain-affected co-driver qualifying race ahead of the Sandown 500.

It was a classic lights-to-flag win for Lowndes, set up when he jumped a slow-starting Alex Premat on the run to the first corner.

From there he was able to control the race, comfortably dealing with showers of rain on slick tyres as he cruised to a 109th career win by 2.5s.

"We said at the start of the race that it doesn't matter where we get off the line, just keep it clean, let's get on with it," said Lowndes.

"The start was mega, we just got off the line and the first four or five laps the car started to come to us.

"Being the pioneer [in the wet] is not so easy, but once I got the gap on Garth [Tander], I had a little moment into [Turn] 2, but managed to get through [Turns] 2 and 3, and then it was just keep off the kerbs and keep it straight."

Brown finished a fine second, however his race was nowhere near as straightforward.

Having run fourth for the first few laps, the Erebus driver was briefly relegated to fourth by Bryce Fullwood on Lap 6.

With the rain getting heavier and heavier, both Fullwood and Brown were able to relegate Premat to fifth at the start of Lap 12. Brown was then able to barge past Fullwood into Turn 1, right before the Nissan driver spun on the way out of Turn 3.

Fullwood didn't just keep his Altima off the wall, he even managed to hold onto fourth place as he completed a full 360 with Premat bottled up behind him.

But it was enough for Brown to skip away from that battle, moving into a clear third as he set his sights on second-placed Garth Tander.

Within four laps he was on the back of the #97 Red Bull Holden, easing past into Turn 1 on Lap 16 to claim an impressive second place.

"I didn't know what was going to go on, it kept raining and then drying," said Brown.

"At the start I was probably pretty conservative, I thought, you know, we're not in a bad position here, we're fifth, I'd take that. The car was awesome, I can't thank the team enough because we just picked one off at a time."

Tander came home third, with Fullwood fourth thanks to remarkable fortune from that mid-race spin.

"It wasn't planned and there was certainly no skill behind that, that was a lot of luck," said Fullwood of the spin.

"It's certainly not the kind of driving I'd like to display, but very fortunate that I was able to stay out of everyone's way and keep it off the fence and keep going.

"I think we had quite a lot of speed, but just way too radical."

Thomas Randle was fifth at the finish, having won out from a fierce late battle with Tickford teammate James Moffat and Premat.

Having been tipped into the fight when held up by the Fullwood spin, Premat was lucky to hang on to fifth when he ran wide at Dandenong Road on Lap 14.

The trio then came to blows at Turn 1 the following lap, Moffat left with badly damaged steering after running wide and then hitting Randle.

The incident left Moffat out of the race and fuming with Premat.

"I got up the inside of [Premat] at Turn 6 and now because there's a mile of run-off he's just bailed off," said Moffat. "

He shouldn't have been in front of me in the first place. And then I've just run a bit wide, I was at Turn 1 exit and he's just given me no room and clipped the left front.