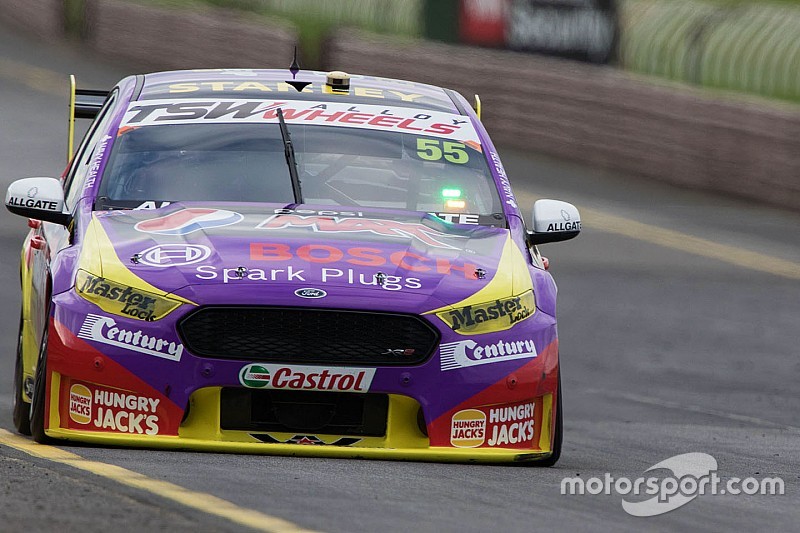 Jamie Whincup was the early pace-setter in the session, jumping to the top on his second run with a 1m08.623s. But just when it looked like that time would stand up through the final runs at the very end of the 20-minute session, Mostert pipped it with a 1m08.614s right at the flag, securing pole for the first qualifying race.

“That was seriously hard,” said Mostert. “Three runs on tyres, I just had to dig deep on that last one. The guys tuned the car up a little bit, the changed helped to get that 8.6s.

“One third of the job is done, it puts us up there for the qualifying race.”

Triple Eight driver Whincup ended the session second, by just 0.008s, despite not improving on his final run. Penske’s Fabian Coulthard did improve on his final run, but not enough to make a difference to his position, slotting into P3 behind Mostert and Whincup despite finding a hundredth on his last lap.

Garth Tander qualified fourth in the Holden Racing Team Commodore, ahead of James Moffat, who once again led the way for Volvo, out-qualifying team-mate Scott McLaughlin by two spots.

Will Davison made big ground on the final run, going from outside the Top 10 to P6 with a 1m08.814s. That pushed James Courtney back to eighth.

Shane van Gisbergen had an uncharacteristically tough session, falling to ninth having not improved on his final run. That wasn’t the only surprise result, however; Mark Winterbottom once again missed the Top 10, qualifying 11th, while the two form cars from yesterday’s co-driver sessions, the #17 Penske Ford and the #888 Triple Eight Commodore, were just 12th and 14th fastest respectively.

The co-drivers will now take over the cars for the opening 20-lap qualifying race, which will then determine the grid for the second qualifying race for the primary drivers.

The result of that race will set the grid for tomorrow’s Sandown 500.