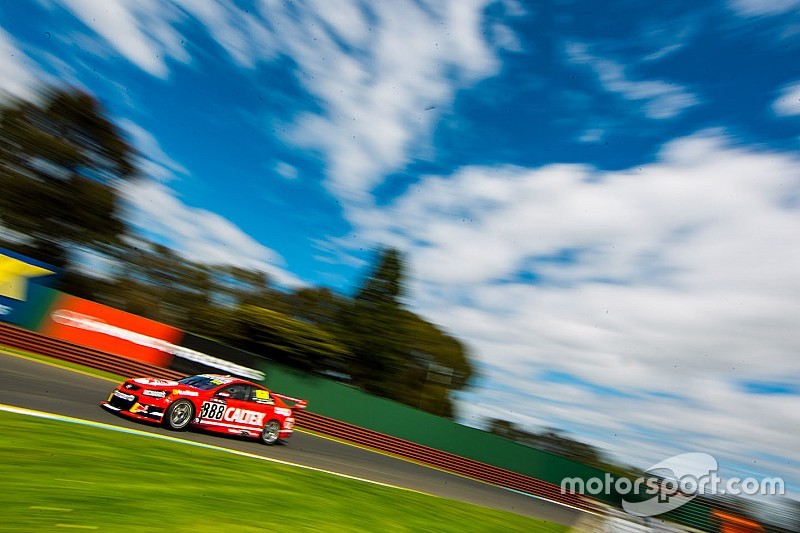 Triple Eight driver Steve Richards emerged as fastest of the co-drivers in the second practice session for the Sandown 500.

With the remainder of today’s running restricted to co-drivers, it was Richards who topped the second 30-minute session in the #888 Triple Eight Commodore he will share with Craig Lowndes.

It was a late run on decent rubber that made the difference, a 1m09.741s just under two minutes from the end leaving the four-time Bathurst winner fastest.

“The second set of tyres we had on were reasonable,” he said.

“The cars feels good, we’re trying to get our eye in and do some longer running with more of a race car. There’s no question that tyre life is going to be an issue on the weekend, so we’re focussing on that.”

Tony D’Alberto finished up second fastest in the #17 Penske Ford, having sat on top for the majority of the session. In the end he was pipped by just 0.09s, having lost some time with an issue.

“I was pretty comfortable in the car straight away,” he said.

“We had a problem on one of the runs where we tried something and there was something wrong with the car. So we lost a little bit of time and just got jumped at the end. It’s only practice. I’d be a lot more upset if I was 25th.”

Warren Luff was third fastest in the #2 Holden Racing Team Commodore, having jumped to P2 inside the last 10 minutes before being shuffled back by Richards. Dean Canto was next in line in the #1 Prodrive Ford, despite having a small off at Dandenong Road right at the end of the session.

Jono Webb (#19 Tekno Commodore) was fifth fastest, having just jumped the #15 Nissan of Russell Ingall right at the end. Steve Owen was seventh in the #55 Prodrive Ford, ahead of the Volvos of David Wall (#33) and James Golding (#34).

Ash Walsh finished up 10th, having been P4 before bringing out a red flag with four minutes to go when his #14 Brad Jones Racing Commodore came to a halt on track. It fired back up immediately, however, with Walsh getting back on track in the closing seconds.

There is one more practice session to come today, another 30-minute run for the co-drivers.