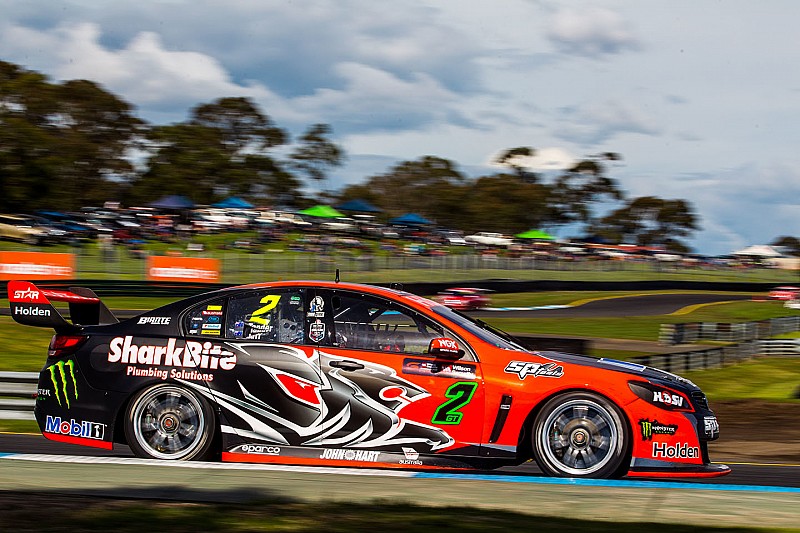 The #2 Holden Racing Team Commodore was in the game all day, Luff leading the majority of his stint before losing out the lead to Paul Dumbrell not long before handing over to Tander.

Tander shook out from the stops back in the lead, however, having made the driver change behind a Lap 55 Safety Car sparked by Dean Canto going off at Turn 4.

The team then played the strategic game perfectly, executing a four-stopper – complicated by two rain storms – with a final tour through the lane 45 minutes from the end of what became a timed race.

It gave Tander great track position, with plenty of breathing space over the #97 Triple Eight Commodore in second place. Everything was set up for a comfortable run to the finish.

And then came the inevitable twist. With 20-minutes of the race left to go, Tander’s left-front guard worked its way loose. It put the car in genuine danger of being handed a mechanical black flag, giving Tander, Luff, and HRT plenty to sweat over as the minutes ticked down.

That wasn’t all. Van Gisbergen put in a typical van Gisbergen final stint to hunt down the leading Commodore, the gap coming all the way down to 0.3s in the closing laps.

In the end, Tander got away with it. Race control stayed quiet about the loose guard, van Gisbergen fell just short, and Tander came home to record his first Supercars win since Townsville in 2014.

“The car was really nice until the guard fell off it, then it was really hard work,” said Tander. [Luff’s] starts and first stint were really impressive. I wanted this one on the CV.”

The Kiwi had to come from the back end of the Top 10 after the driver change, but shook out behind Tander and Volvo’s Scott McLaughlin after the final stops.

When McLaughlin ran wide as he came out of the pits after the final stop, third became second. And while he couldn’t quite hunt down Tander, van Gisbergen did emerge as the new championship leader.

“I’m glad they let that thing run,” said van Gisbergen off the wounded HRT car. “It wasn’t really safe, but it wouldn’t be right to win that way.”

Will Davison and Jono Webb benefited from McLaughlin’s post-stop mistake as well, Davison slipping into third and then holding off McLaughlin despite a broken header late in the race.

McLaughlin and David Wall were resigned to fourth, although it was a decent points haul for McLaughlin on a day where some of the title contenders fell short.

The most noteworthy example of that was the #88 Triple Eight Commodore of ex-points leader Jamie Whincup and Dumbrell. The car spent the first two thirds of the race in genuine contention to win, only for a silly error from Dumbrell to bring it all crashing down.

After bogging down at the start and dropping to fourth, Dumbrell ran a longer stint than most co-drivers to put the car in contention for what was the effective lead after the Lap 74 switch back to slicks.

But six laps later the #88 was hit with a drive-through penalty, handed down thanks to Dumbrell having popped his left arm out of the belt in pit-lane before the car was stationary during the driver change.

Whincup served the penalty straight away, rejoining in 18th. He ultimately finished 13th.

“I’ve let the boys down today,” said Dumbrell. “It’s not even to save time, I just had a brain fade there. Really disappointing for J-Dub and the boys. Unfortunately those things happen and I’ve got to live wiht it.”

That wasn’t the only car to be penalised. The #14 Brad Jones Racing Commodore copped the same penalty, Tim Slade forced to serve a penalty on Lap 103 after taking over from Ash Walsh, the issue being that he took off from the stop with one of the bottom clasps not locked in.

That meant that, having run in the Top 3 early on and been on the fringe of the Top 10 as the race settled down, the #14 come home just 16th.

Mark Winterbottom’s title chances took a massive hit, thanks to co-driver Canto hitting the wall on Lap 55. The #1 Prodrive Ford was running fourth, the team having seemingly successfully gambled on slicks during the first rain storm.

But nosing into the Turn 4 wall put paid to any chance of a decent points haul, Winterbottom finishing all the way down in 24th.

Chaz Mostert and Steve Owen recovered from some early pit stacking behind the #111 Super Black car to finish a fine fifth, ahead of Fabian Coulthard and Luke Youlden, who ran a slightly off-kilter four-stopper to slot into sixth.

Todd Kelly and impressive Supercars rookie Matt Campbell stopped five times on their way to seventh, while Craig Lowndes and Steve Richards recovered from both drivers having Turn 4 offs to finish eighth.

One of the race’s highlights was World Endurance Championship regular Richie Stanaway shining on what was his Supercars debut.

The Kiwi put in a stunning stint in Chris Pither’s #111 Ford after the first round of stops, storming through the field on a drying track having gambled on staying on slick tyres.

He ran as high as third before handing back to Pither, although the car was ultimately shuffled out of the Top 10 and finished 17th.

The race didn’t run the full 500 kilometres, a timed finish coming into play after a lengthy suspension due to James Golding’s nasty Lap 1 smash.

The Volvo driver went into the wall hard at Turn 6, after his front-right deflated during the run up the back straight.