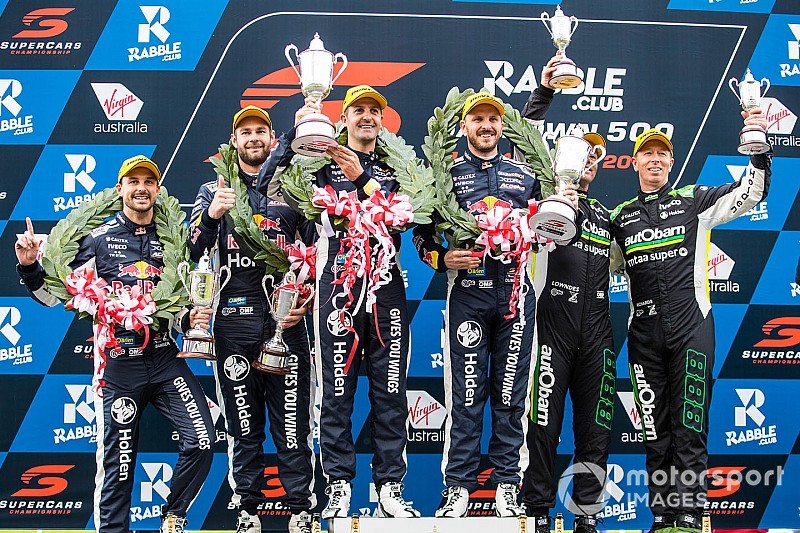 Jamie Whincup and Paul Dumbrell executed a perfect lights-to-flag win at the Sandown 500 on a day dominated by the three Triple Eight Holdens.

The reigning series champion and his vastly-experienced teammate were untouchable in the opening enduro of the season, cruising to victory ahead of teammates Shane van Gisbergen/Earl Bamber and Craig Lowndes/Steve Richards.

It's the third Sandown 500 win for Whincup and Dumbrell as an enduro duo.

Dumbrell made light work of the first stint, bolting from the outside of the front row and into the lead. His advantage over Alex Premat in the #17 Penske Ford was 6s after 10 laps, and over 10s just five laps later.

The lead got as high as 17s before a Lap 23 Safety Car forced the leaders into the lane for the first time.

The caution was thanks to Dean Fiore's Nissan being left temporarily stranded on the back straight, having had its front-right wheel dislodged by an out-of-control James Courtney at Turn 3.

Dumbrell's advantage was enough that he was able to wait for the Safety Car to be called before pitting, coming out in front of Steve Richards in the #888 Holden who had pitted several laps earlier, while Premat dropped the third.

Richards proved a little tougher to shake after the Lap 26 restart, but Dumbrell was able to slowly eke out an advantage. As the race reached the end of its first quarter the #1 Commodore was 8s clear of the sister #888 car, Premat another three seconds down the road.

The gap was out to almost 20s when the next round of stops started on Lap 55, most of the Top 10 diving in to make driver changes while Dumbrell stayed out.

Once again the Safety Car coincided with the leader's stop, Dumbrell pitting at the very moment Jason Bright found himself stranded at Turn 9.

That meant Whincup came back out in the lead, but Dumbrell's hard work was once again undone by the caution.

On Lap 81 Shane van Gisbergen made it a Triple Eight one-two-three. The Kiwi had been handed the car in sixth place, following an action-packed pair of stints from co-driver Earl Bamber.

The Le Mans winner had mostly run around the back end of the Top 10, and was lucky to survive a heart-in-mouth moment between Turns 3 and 4 when he was fired across the grass by Luke Youlden as they scrapped over ninth.

Bamber was ultimately able to climb to sixth before his second stop on Lap 55, Triple Eight then getting van Gisbergen out ahead of McLaughlin but behind Coulthard.

Van Gisbergen quickly got on the back of Coulthard, but it wasn't until the race hit the midway point that he was able to finally break down the Penske driver's defence and move into third.

At that point there was a 12s split across those three T8 Holdens, Whincup 5s clear of Lowndes with van Gisbergen a further 7s behind.

Lowndes pitted on Lap 89 for a pads stop, followed by van Gisbergen on Lap 92 and Whincup on Lap 93. There was a small undercut effect for #888, the gap to Whincup closer to 2s as they settled into the fourth stint of the race.

Once again Whincup was able to slowly stretch the advantage out to 10s before the fourth and final round of stops, the leader coming in on Lap 133.

From there it was a case of controlling the race to put the finishing touches on a perfect 6.8s lights-to-flag win.

"Couldn't be happier, the car's been awesome all weekend," said Whincup.

"PD did a fantastic job, but it's not over until it's over. We just kept our head down and kept concentrating. This race has gotten away from us a few times, but thankfully it was a nice and clean race."

The race ended in a top three lockout for Triple Eight, although there was a change of position between two of those cars at the back end of the penultimate stint. With little threat from behind, Lowndes opted to back off and hand second over to points leader van Gisbergen on Lap 123.

That mean van Gisbergen came home two spots clear of title rival McLaughlin, extending his gap at the top of the standings to 55 points.

Coulthard and D'Alberto fell back to seventh over the last two stints.

Triple Eight could scale back as de Silvestro talks stall