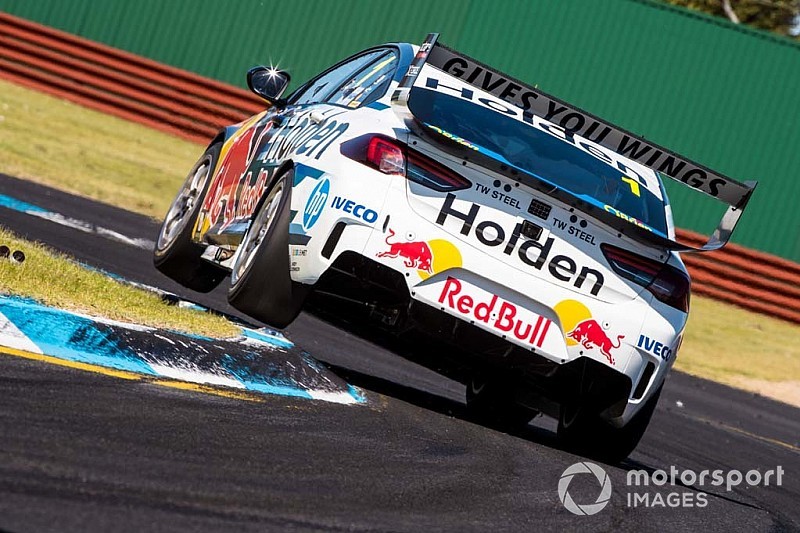 After this morning's damp practice session, it was back to full dry running – and even patches of sunshine – for the 20-minute hit-out to determine provisional pole.

Whincup spent most of the session on top, going quickest with a 1m08.142s inside the first five minutes before improving to a 1m08.115s with eight minutes to go.

That time would have been good enough for provisional pole, but Whincup still went out and improved on his final run, banking a 1m07.838s to stretch the advantage over the rest of the field.

That final run didn't just ensure co-driver Paul Dumbrell will start the first qualifying race from pole, but was marginally quicker than the benchmark time set by Dumbrell during practice yesterday.

“This is a massive deal. [Paul Dumbrell] had the Sandown Lap of the Gods yesterday and I ended up pipping him [today]," said Whincup.

“I would have been hearing about that for the next 25 years…. what a relief to get there!

“There’s still a little bit of that crack treatment stuff on the track from yesterday, but the car’s hooked up, it’s definitely better this year than what it was last year.

“But we’ve been in this position before, we’ve had a good car, and just made rookie errors. We’ve just got to keep the concentration.”

Chaz Mostert grabbed second thanks to an impressive two-lap final stint, the Tickford driver the lone Falcon in the Top 10 after leap-frogging James Courtney, David Reynolds, and Scott Pye, all three having failed to improve at the death.

“I felt pretty confident that the car felt pretty good across the three runs,” said Mostert.

“A bit of traffic on the second one and I didn’t get all my PBs together, but JW is seriously quick, he was quick in practice too.

“It’s just good to give it to [co-driver James Moffat] on the front-row and see what he can do.”

Andre Heimgartner was – somewhat surprisingly – the best of the Nissans in sixth, while other standout performances in the Top 10 included Anton De Pasquale in seventh and James Golding in ninth.

Those two rookies were split by Nick Percat, while Shane van Gisbergen gave co-driver Earl Bamber a bit of work to do by going just 10th fastest after complaining about a vibration in his Triple Eight Holden.

At least he fared better than fellow title contender Scott McLaughlin, who struggled to show any genuine front-running pace and left Alex Premat with 14th on the grid for the first qualifying race.

“That was average from my side, I need to work on that. We’ve got a bit of work to do,” he said.

“It definitely felt better then, so that’s a direction, but it’s very similar to Tailem, we just don’t have the outright speed at the moment.

“I need to give myself a bit of a kick up the backside and just get on with it.”

Moffat to be inducted into Sport Australia Hall of Fame