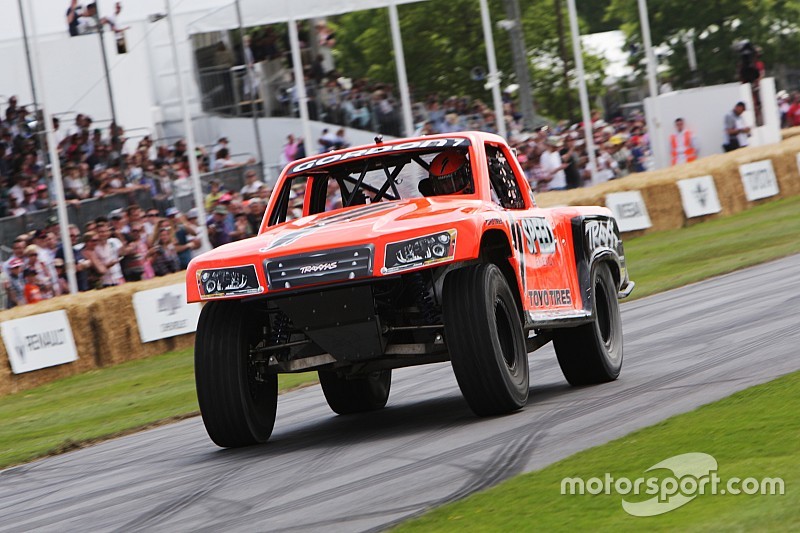 The Stadium Super Trucks could return to the Supercars bill next season, with talks to lift the category's Australian ban ongoing.

It's understood the category is being targeted for next year's Adelaide 500, should a peace deal be brokered between SST and the Confederation of Australian Motor Sport.

The US-based series was banned by the CAMS last year due to safety concerns, sparked by a rogue wheel hitting a pedestrian bridge at Barbagallo Raceway.

The trucks had become a regular at the Adelaide, Perth and Gold Coast Supercars rounds before the incident.

SST boss Robby Gordon unsuccessfully attempted to have the ban overturned in court, before the category made one last appearance on Australian soil at a non-CAMS sanctioned event in Sydney last October.

With the green light from CAMS required for Stadium Super Trucks to compete at Adelaide, Motorsport.com understands that there will be conditions to having the ban lifted, including lower jumps than have been used in the past, and higher catch fencing.

"Look we've always been clear about our expectations on what we would want to achieve in favour of a comeback," said Arocca.

"We didn't give them a permanent suspension, so we've been quite frank about saying that we've been in discussions with them and I would say they're fairly positive discussions about our expectations.

"No one's shutting the door on each other, and I'm not going to go into the details about what we're expecting from them and what they're going to provide us, because that's still in discussion and it would be unfair to go public about that.

"But so far the vibe is that, you know, we can probably get a point where both of us can shake hands.

"I mean, things can change – I haven't heard back from them for some time recently – but we spoke through most of the latter part of April, early May and so we're now just at a point where we're hoping to hopefully wrap things up in the next two to three weeks."

Arocca also rejected the long-held theory that the saga was fuelled by a personal feud between him and Gordon.

"We have only been at loggerheads to the extent that they were not happy about being suspended," he said.

"We've been very clear about why those reasons were, and I think it's fair to say that we haven't changed our position, but we've just had the opportunity to sit down and talk in more detail.

"I've got nothing personally against Robby and Robby's rung me a number of times, and there's no animosity, there's no backchat, we just want to be professional about the outcome. And I'm pretty confident that if discussions keep going the way they are, then hopefully we're going to achieve it.

"It's still got to go to the board, and we've still got to reach a concluded agreement outcome, but I'm pretty confident."