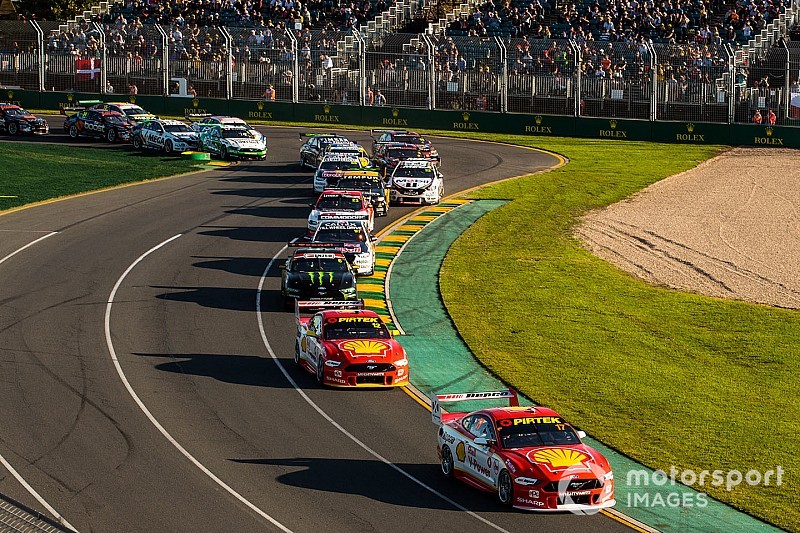 Supercars has confirmed that the Ford Mustangs and Holden Commodores will undergo a centre of gravity change ahead of the upcoming Symmons Plains round.

As first reported by Motorsport.com, teams were told earlier this week that both the Ford and Holden models were likely to be subject to a centre of gravity change in the form of a mandated roof line ballast.

An alteration to the ballast requirements for those two models has now been confirmed by the series, the swift approval by the Supercars Commission meaning it will be in place in time for next week's Symmons Plains round.

Details of the new ballast rules, including specific weights and location, have not been disclosed.

Motorsport.com understands the original figures given to teams were 30 kilograms for the Mustang and six kilograms for the Commodore, however sources indicated those numbers were likely to shift before being finalised.

According to a statement from Supercars, all models from each manufacturer will be given the same ballast requirement, making it a technical parity ruling rather than a bid to provide sporting parity.

"Supercars does not pursue sporting parity, which seeks the equalisation of the abilities of participating drivers and or teams," read the statement.

It continued: "On presentation of the Mustang at Adelaide, the Supercars technical department recorded a significant increase in ballast as compared to the previous model, the Ford Falcon.

"To ensure competing teams did not have a technical advantage, the technical department, on instruction of the Commission, conducted centre of gravity testing on the 18th and 19th of March in Melbourne.

"The same and equal change is being made to all models. That is to say, there is no change in relative performance between teams using the same model of vehicle, only a redressing of the technical differences between the models in accordance with Supercars’ constitution."

Supercars CEO Sean Seamer confirmed that, despite the centre of gravity change, there were never any breaches of the technical regulations by any teams.

“The success of Supercars is built on the closeness and spirit of competition. Like the ZB before it, the Mustang has advanced build techniques and technology," he said.

“All three homologated vehicles have been built within the rules.

“The Supercars championship is underpinned by technical parity. That is, the sport seeks to minimise any technical differences between models of vehicle in the spirit of equitable competition.

“I compliment the manufacturers, homologating teams and the Commission for their positive approach to supporting technical parity across all models.”

DJR Team Penske has already been forced to make changes to its all-conquering Mustang, removing an unusually heavy exhaust system before the Albert Park round.

The Mustang has won all six races so far this season, five for DJRTP's Scott McLaughlin and one for Tickford driver Chaz Mostert.