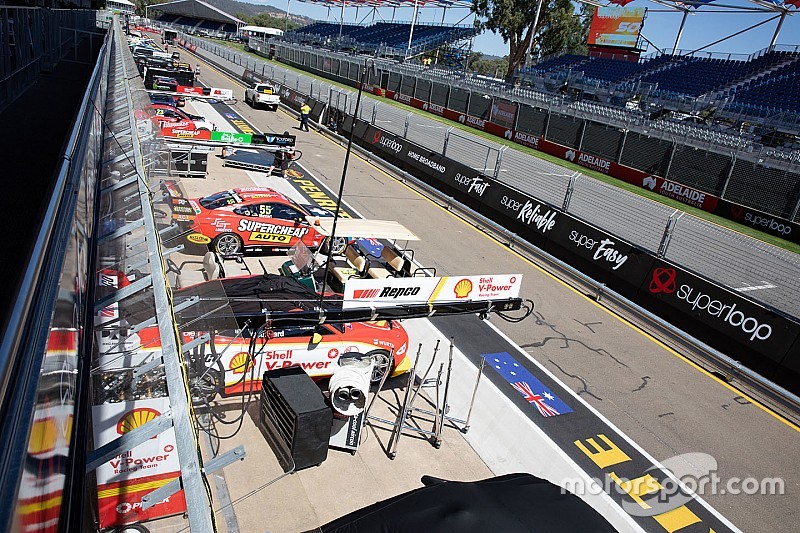 Changes to the Adelaide street circuit will create "chaos" during this weekend's Supercars races according to leading driver Lee Holdsworth.

The circuit has undergone a re-profiling through the turn six and seven complex, the biggest change involving the wall on the exit of seven being moved right up to the exit kerb.

The change is a response to the controversy during qualifying last year, when Shane van Gisbergen escaped penalty for using the large strip of tarmac between the exit kerb and the wall.

The new positioning of the wall leaves no room for error, with a tyres held in place by a conveyor belt right on the kerb.

However the corner is still creating controversy, a number of drivers concerned about concertina-style pile-ups if one car gets buried in the tyres.

Weight was added to that theory by James Golding's innocuous nudge during this evening's practice session, which left his GRM Holden stranded despite there being no serious damage.

According to Tickford driver Holdsworth, it's a recipe for chaos.

"I see it as being a major drama over the weekend," he said.

"The problem with what we've got now, the idea was great, but what it will create is chaos.

"If someone goes in there, we saw it in Super2 [practice] and in our session with Golding, if you hit that wall it sucks you in and spits you back out or stops you dead. Someone following closely is going to run up your arse and create a concertina.

"Certainly on the opening lap everyone goes side-by-side through six and seven, and that won't be possible now. The guy on the outside will be in the fence and then it's back into the traffic.

"It's going to create plenty of dramas."

DJR Team Penske driver Fabian Coulthard agreed that the corner could create problems, however he says the tyre wall should be shortened, rather than moved back to its original position well outside of the corner.

"I don't think we've seen a red flag for that corner before," he said.

"If the tyres weren't quite as long, I don't think it would be as much of a drama. They go down from the exit of [turn] seven for quite a way. Maybe we could shorten that up a little bit.

"I think what they've tried to achieve is good. The racing will be better.

"It will definitely create potentially a passing opportunity. It's created a driver corner now, so you're going to have to drive out of seven whereas before you could just run out over the kerb and it didn't matter.

"We don't want to lose that, but I think the way the tyres are, how the belt gets rippled, and it's now sort of leaning over more than what it was when we started... as the race goes on, that's going to get worse."