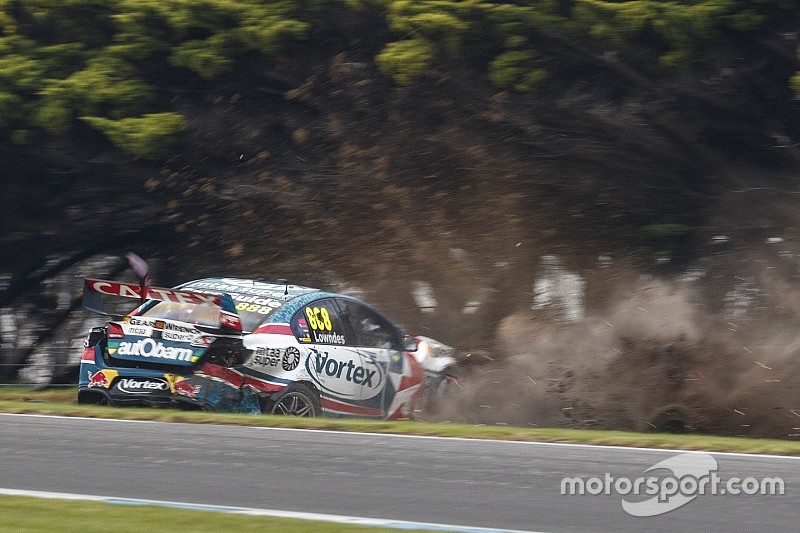 Supercars is investigating the spate of tyre failures that marred Saturday’s opening race at Phillip Island, following what one team owner described as a “dangerous situation”.

Fears that the new-specification Dunlop soft compound control tyre would prove too fragile at the high-load Phillip Island circuit were realised, with at least 15 right-sided tyre failures during the opening race.

The situation has led to an emergency meeting of the Supercars commission this evening, which will be followed by a second meeting tomorrow morning ahead of the second 250-kilometre race.

The commission meetings are likely to determine whether or not changes to the minimum pressure of 17 psi will be enforced, or whether a maximum camber limit will be introduced.

The tyre issues were widespread during the race, with Triple Eight, Tekno and LD Motorsport the only teams not to suffer a failure at all during the race.

T8 hasn’t been immune to the issue this weekend, though, with both Craig Lowndes and Shane van Gisbergen suffering failures during practice on Friday.

Prodrive Racing Australia was the worst hit, with Chaz Mostert and Cam Waters having two failures each while Jason Bright had one.

According to PRA boss and Supercars commission member Tim Edwards, the situation was bad enough that the race potentially should have been red flagged.

“It was dangerous,” he said. “As a category, we were lucky today. When you have 20-plus tyres fail – and it will be more than that, because some went unrecognised because cars were coming in anyway.

"It was that common. We had 20 or 30 tyre failures, so you’ve got to think of safety first.

“We were lucky, and a couple of Safety Cars came at opportune times that allowed us to have a bit of a reset. But it was a very dangerous situation out there today.”

Notoriously tough on tyres, Phillip Island was singled out as somewhere that required a tyre test when Dunlop was evaluating the new constructions during last season.

A test with Mark Winterbottom’s PRA Ford was arranged, but poor weather conditions on the day of the test meant it never went ahead – something that GRM driver Garth Tander reckons is playing its part in what’s happening this weekend.

Asked if anything could be done before tomorrow’s race, Tander replied: “Not unless they put lights up tonight and go testing, because that is what should have happened before we came here.

“This is easily the most tyre sensitive circuit that we go, or any category in Australia goes to, and they didn’t end up doing a tyre test here – that should have happened before the tyre was even signed off.”

Asked for his take on the washed out test and it’s importance now, Edwards said: “It’s easy in hindsight to make that statement. Of course it would have been good to run the tyres here.

"But we went to Eastern Creek and that’s a high-load circuit as well, and we had 26 cars running and we didn’t see a problem. Clearly we’ve tipped it over the edge here.”

When asked if he expected changes to pressure and camber limits tomorrow, Edwards said it will come down to details from the teams.

“At the moment [Sporting and Technical Director] Dave Stuart’s job is to get all the facts and figures together,” he said.

“We can’t make any decisions until we’ve got that. If teams are having failures running three PSI less and one degree of camber more than teams that weren’t having issues, then clearly that’s down to the teams.

“We certainly took a very conservative approach, but how conservative do you have to go? That’s the question that nobody really knows.

“Clearly we’re going to have to go more conservative than we did today, but we’re in the business of going racing. You can say the drivers have an impact on it as well, and yeah that’s true, but they’re trying to go as fast as they possibly can. That’s what they do for a career. That’s what they do to entertain the fans.

“So if they’ve got to drive around at 95 per cent, first of all you’ve got to mentally get that through their head because it’s not what they naturally do.

“It’s a real worry for the category, there’s no doubt about that. But a couple of cars did manage to do the race without a failure, so whether they were driving extra cautiously, or whether they were even more conservative than the rest of us, we can only speculate.

“Whenever you have tyre failure like this, and we’ve seen it in Formula 1; they’re pretty draconian with bringing in maximum cambers or minimum pressures. It’s what the administrators have to do to protect the sport.”