Macauley Jones says his horror shunt during practice for the Adelaide 500 was the 'biggest impact' of his racing career so far. 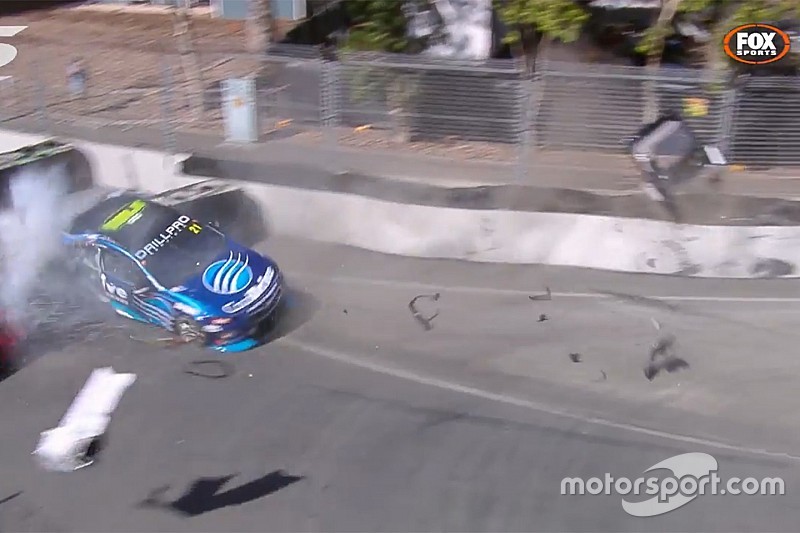 Jones' debut weekend as a Supercars full-timer has been turned upside down by the monster crash earlier today, sparked by a front-right brake failure at the end of the long straight heading into Turn 9.

His Brad Jones Racing Holden was pin-balled off two walls after a wild backwards ride, something he's since described as the "biggest impact" of his career.

"[I'm] a little bit shaken up. It was obviously a massive accident, probably the biggest one I've ever had," said Jones.

"It's never a good thing when you lose brakes, especially at the end of a straight like that.

"You're going at such a high speed there that it's probably lucky the wall was so far away. It felt like it was in a bit of slow motion going backwards down the road there. It's never a fun thing when you can't see where you're going, and you're going at that speed.

"It definitely felt like the biggest impact I've had. It's lucky it's a tyre wall and not a concrete wall as well."

Jones added that he had no warning heading into the braking area for Turn 9, and that he even initially had full brake pressure.

"I had no issues," he said. "That was my first flying lap of the last outing, and it was all going well until that point.

" I hit the brake pedal, it seemed like it was all there at the start and then it started to fade away as soon as I hit peak pressure.

"I was a passenger from there."

The team has set itself the ambitious target of having Jones' car fixed and ready to go for today's first 250-kilometre race, which doesn't kick off until 4:50pm local time.

According to BJR's engineering manager Andrew Edwards, the telling factor will be the cage work around the transaxle.

"It’s obviously pretty extensive at the rear. At the moment we’re stripping it as far back as we can," said Edwards.

"There are some kinks in the tubes that we need to cap and fix before we can go back out and we’re concerned about the gearbox position moving, because it was such a big impact.

"Such a big hit changes the position of all the arms there, all the bodywork for the cage, so it’s just, if it goes back in in the right position, we’re there.

"There’s so much cage work back there, if it’s not, the project becomes much bigger.

"At the moment we’ve got everyone on it that we can and we’re going to have a crack at fixing it.

"I think we’ve got a pretty good track record of making it out, but it is pretty extensive. Luckily, the timing to the race is pretty good today, so we’ll give it a shot."

As for the failure itself, Edwards confirmed it was a brake line that caused the loss of pressure.

"It was instantaneous," he said. "It was a line, we need to analyse and understand why, we don’t have full analysis on why it occurred, we can just see it occurred at the moment.

"There’s no changes or obvious reason why it’s happened."