2013 will see the new cars including Nissan and Mercedes, along with new events for the V8 Supercars.

This weekend sees the end of an era in V8 Supercars as we know it. With the title wrapped up by Team Vodafone’s Jamie Whincup during the previous round at Winton, the focus is on the final Holden versus Ford battle that has raged for almost 20 years.

On November 30 to December 2, the final showdown will be held at the on the Homebush street circuit in Sydney. 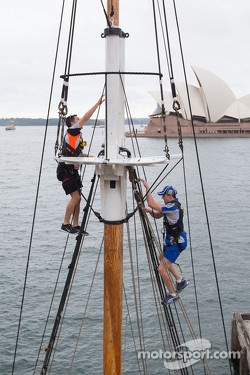 Next year we see the emergence of the Car of the Future which brings with it the inclusion of Nissan and Mercedes to the Australian championship. Kelly Racing were the first to accept the challenge of the new manufacturers jumping on board with Nissan after flying the red flag of Holden whilst Stone Bros Racing move from Ford to Mercedes.

Although those teams remaining loyal to Ford and Holden believe they will have the advantage over their rivals come the opening round of the 2013 calendar it remains to be seen whether this will be the case, as all teams fall within the COF specifications. Depending on the success of the new entities there is every possibility that others like Toyota may follow.

Fans will have the opportunity to sit back and savour the next three days of what has been a spectacular series before deciding who they will be cheering for next year.

Special livery to mark in Sydney the end of a great era in motorsport: TeamVodafone