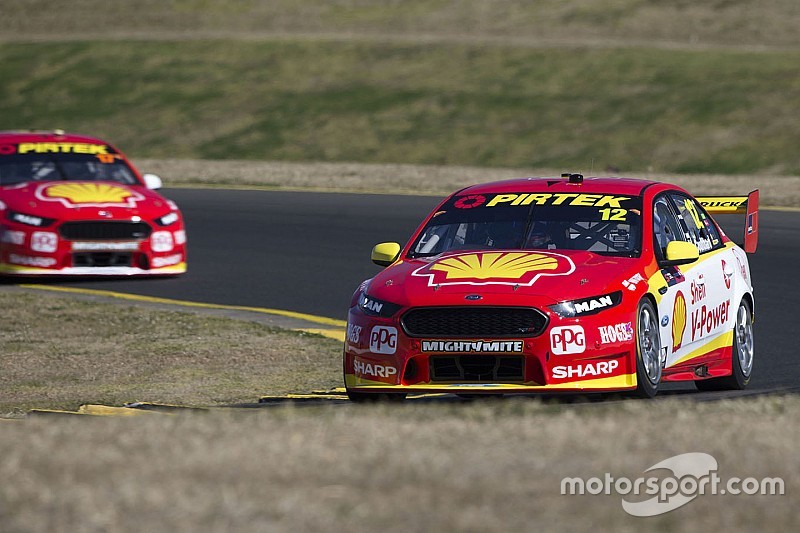 Fabian Coulthard returned to the winners circle with victory at Sydney Motorsport Park, while Scott McLaughlin was penalised for spinning Shane van Gisbergen.

It was Mark Winterbottom that got the jump from the cleaner side of the front row at the start of the race, leading the field through Turn 1 while polesitter McLaughlin was forced to go three wide with van Gisbergen on his inside and Coulthard on his outside. Ultimately it was van Gisbergen that won out and took second place, while McLaughlin managed to stave off Coulthard and hold on to third.

Despite pulling a small gap on the first lap, Winterbottom was never truly in control of the race in the first stint. He had mirrors full of van Gisbergen across the first nine laps, before van Gisbergen barged into the lead at Turn 2 on Lap 10.

It was only a short-lived lead; at the end of that same lap van Gisbergen dived into the pits, handing the lead back to Winterbottom. It wasn’t an entirely straightforward stop, however, with van Gisbergen running wide at Turn 2 after leaving pitlane. By then he’d already been jumped by McLaughlin, who undercut the Red Bull Holden by stopping a lap earlier.

Winterbottom opted for a longer first stint, but when he pit on Lap 16 he didn’t do so from the lead. He’d lost that a lap earlier by a hard-charging Jamie Whincup, who also took his first stop on Lap 16.

As the stops shook out McLaughlin emerged in the lead ahead of van Gisbergen, but their strategy was thrown into disarray when the Safety Car was called to clear debris on Lap 17. It put those on fresher tyres within striking distance, setting up a tough final 10 laps for the leaders when the race was restarted.

When the race did go green, the action kicked off before tyre life could become a factor. After van Gisbergen snuck through on McLaughlin on the restart, the Penske driver got into the back of van Gisbergen and turned him around at Turn 2. That left the Red Bull Holden facing the wrong way, and also led to front-end damage for David Reynolds and Whincup, who both got into the back of McLaughlin in the wake of the initial contact.

McLaughlin continued to lead from Coulthard, but, with the #12 Penske Ford having stopped six laps later than McLaughlin it was never going to last long.

“I kept out of trouble, it all unfolded in front of me,” said Coulthard.

“Unlucky for Scotty; I’m not 100 per cent sure what happened, but we’ll take it.”

McLaughlin finished second on the road, but was slapped with a 15s penalty for the van Gisbergen contact and was classified 10th. There were not arguments regarding the penalty from the points leader, who made a beeline to apologise to van Gisbergen as soon as the race was finished.

“What can I say? It was an absolute balls-up on my behalf,” he said.

“I’m sorry to [Shane] and his team, and I saw Jamie got damage as well. I’m sorry, it’s not my style. I need to look at a lot of stuff on myself tonight, it wasn’t my best race on my behalf.”

McLaughin’s penalty elevated Chaz Mostert to second place, the Prodrive Racing driver the big winner from the restart shenanigans as he vaulted from seventh spot.

“It was a lucky dip down there at Turn 2,” he said. “I had a good line – everyone went to the outside, I went to the inside and got some positions.

Whincup banked valuable points by finishing third despite that heavy damage to the front of his Commodore, while Winterbottom slipped back to fourth.

Scott Pye was an impressive fifth in the HSV Racing Commodore, ahead of Nissan driver Michael Caruso, Craig Lowndes, Reynolds, and Garth Tander.

“He hit me once, I tried to correct it, and then he finished me off,” he explained.

“To his credit he was straight here apologising, [so] all good.

“The thing that frustrates me is he only got 15s for it and we’re at the back, but bigger people than me make those decisions.”