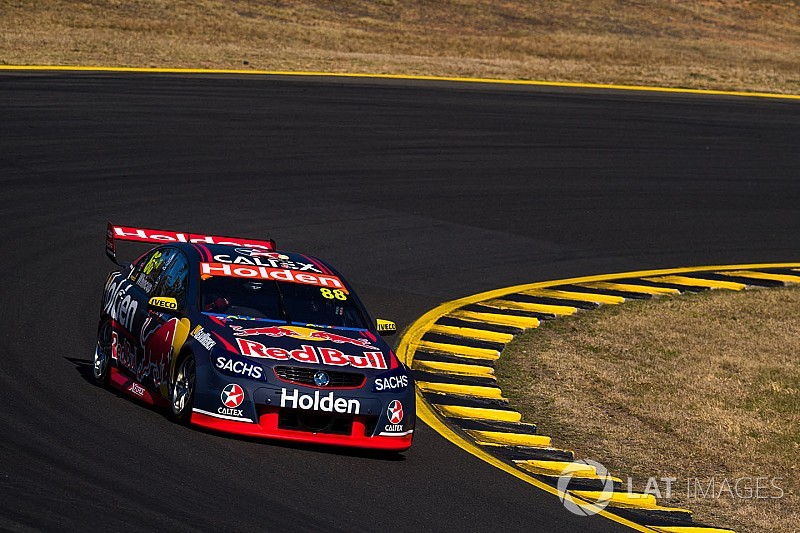 Jamie Whincup is now the standalone record holder in terms of career Supercars win, after a charging to his 106th series victory in Sydney.

Whincup charged past teammate Shane van Gisbergen to win his 106th race, putting him one clear of Craig Lowndes on top of the all-time winners’ list.

He’s also now within 12 points of series leader Scott McLaughlin heading into the Season of Endurance, which kicks off at Sandown next month.

It was a dream start to the race for Chaz Mostert from the outside of the front row; not only did he make a smart getaway himself, but polesitter McLaughlin went nowhere, giving Mostert a clear run through Turn 1.

That left the Prodrive Ford in the lead, followed by the Red Bull Holdens of Whincup and van Gisbergen, and the two Penske Fords, Fabian Coulthard relegating McLaughlin back to fifth after sneaking up the inside at Turn 2.

The top five ran in relative formation across the first stint, Whincup applying pressure to Mostert while McLaughlin was glued to the back of his teammate. It was those two that decided to kickstart the first round of stops in terms of the leaders, McLaughlin pitting on Lap 9 before Whincup bailed out of the battle for the lead a lap later.

It proved to be a timely decision, particularly in Whincup’s case; moments after the #88 Holden left the pits, the Safety Car was called to clear up debris left on the front straight by Rick Kelly’s spectacular tyre failure.

That meant everyone who hadn’t stopped did so immediately, allowing Whincup to jump Mostert, while McLaughlin cleared van Gisbergen and Coulthard – who both took on more fuel than the other leaders.

When the race restarted on Lap 13 Whincup was able to bolt, pulling out a 6s lead by Lap 25. Mostert, meanwhile, bottled up McLaughlin and van Gisbergen, which played into the hands of van Gisbergen who was looking at a shorter second stop.

On Lap 27 van Gisbergen dived past McLaughlin at Turn 4 to take third spot, before the pair of Kiwis made their second stops at the end of the same lap. They popped out in the same order, but with van Gisbergen now closer to four seconds clear of McLaughlin.

Two laps later Whincup gave up his now 7s lead and hit the lane. As he exited the pits van Gisbergen came flying through Turn 1, the pair meeting at the apex of Turn 2. A small lock-up from Whincup on cold tyres made the difference, van Gisbergen muscling his way into the effective lead.

Mostert and Coulthard waited until Lap 34 to make their second stops, the Coulthard jumping the former race leader thanks to needing a little less fuel. The pair came out 15-odd seconds behind the Red Bulls out front, but with significantly younger tyres at their disposal.

With 10 laps to go Coulthard was within 5s of the leaders, while Whincup, with the slightly better rubber of the two Triple Eight cars, was still buried behind van Gisbergen. At Turn 3 on Lap 42 that finally changed, van Gisbergen making it easy for Whincup to take over the lead.

It proved to be a race-winning move, Whincup skipping away to a 9.8s victory.

“I knew it was going to be a battle right at the end there,” said Whincup.

“Thanks to my teammate, we look after each other here at Red Bull, for letting me through. My car was quick, and I thought if Fabs and Chaz had got through earlier it would have been on, so I put my head down and pushed hard.

“I’m not getting too excited about the numbers, but it’s certainly a good feeling to get the win today.”

While Whincup did a bolter after getting in front, van Gisbergen wound up with mirrors full of Penskes in the closing stages of the race.

For a while it was McLaughlin under his rear wing, before Coulthard took over the Shell-backed charge from his teammate on Lap 45. He too struggled to unclog the van Gisbergen bottleneck, leading to a four-car train starting with the #97 and ending with Mostert in fifth.

Van Gisbergen’s defence held firm until just two laps from the end, when Coulthard finally got through to secure second spot. The battle for third continued right to the flag, van Gisbergen hanging on to take the final spot on the podium over McLaughlin by less than two tenths of a second.

“I had a good battle with Shane,” said Coulthard. “He had a good car in places, mine was better in others, and I had a little bit more tyre in hand. We can’t qualify, but we can race alright so I’m pretty happy.”

“It was pretty awesome,” added van Gisbergen. “I let Jamie go, he was much quicker. And then Scotty and all the boys caught me, and I definitely wasn’t letting Scotty go! Fabian and I had a great race, but he pulled a nice pass and got past me.

“I was just slowing up every corner to get a good exit to they couldn’t get me at the next one. I got my bumper beat up a few times, but all good, we got there in the end.”