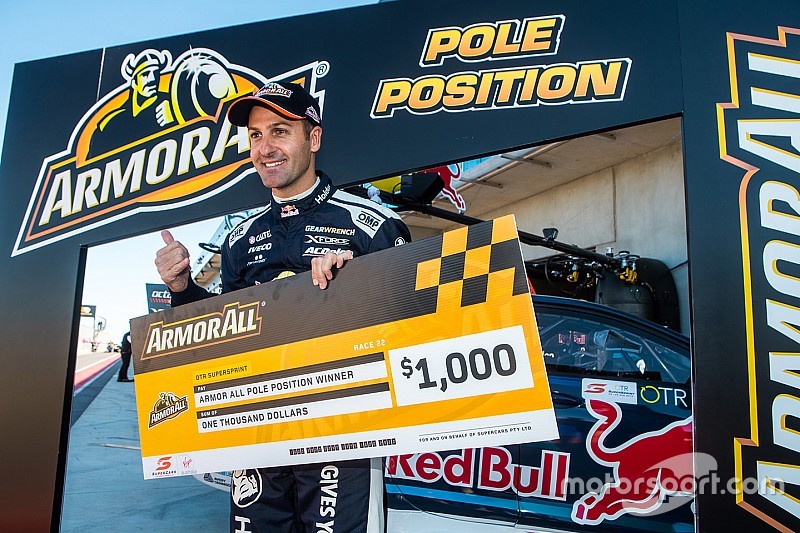 Jamie Whincup will provisionally start the first Supercars race of the weekend from pole position after topping qualifying at the Bend Motorsport Park.

Whincup trailed down in 21st position after spinning out on his own at turn 12, but propelled himself to the top of the timesheets as soon as the second set of runs began with a time of 1m50.137s.

Whincup’s lap was over half second quicker than first run pacesetter Rick Kelly, but the Red Bull Holden’s pole remains provisional at present, with stewards investigating the manner in which he re-entered the track following his earlier off.

The 35-year-old nearly made contact with James Golding, who had to take evasive action by going over the grass.

"I couldn’t see a thing and I waited for, it felt like five minutes, waiting, waiting, and eventually you just have to go," Whincup said.

"Was that James Golding? I owe him a beer Sunday night."

Kelly was unable to improve on his previous benchmark, allowing Shane van Gisbergen to qualify second and lock out the front-row for Triple Eight Engineering.

Standings leader Scott McLaughlin ended up fifth and the best of the Fords, albeit 0.669s off the pace of pole sitter Whincup.

Van Gisbergen overtook McLaughlin on the penultimate lap but mysteriously slowed down at turn 3, forcing the latter to abort his final flyer.

The awkward run-in between the two championship contenders is also under investigation by the stewards.

After McLaughlin, Mark Winterbottom was next up in sixth and ahead of Chaz Mostert and Cameron Waters, with Tim Slade and Garth Tander completing the top 10.

Update: Both Whicup and McLaughlin were cleared of any wrongdoing by the stewards following post-qualifying investigation.