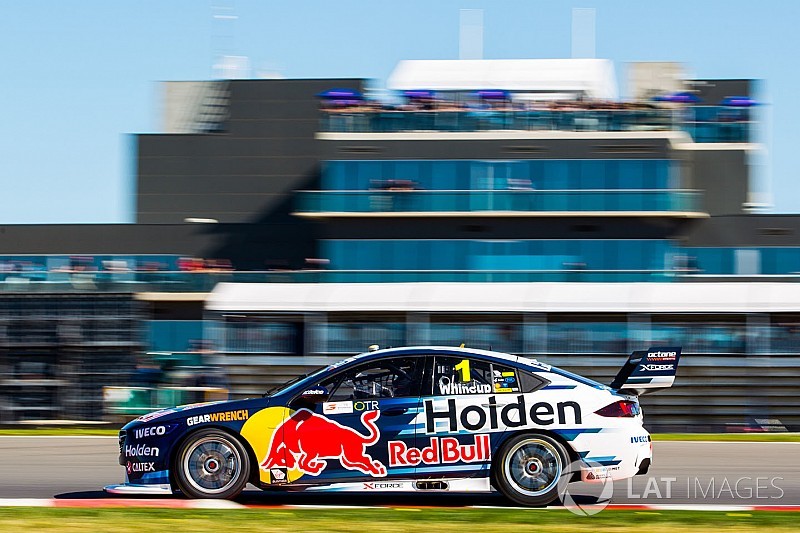 Jamie Whincup took a dominant win in the final race of the weekend from The Bend Motorsport Park, capturing his fourth victory of the 2018 Supercars season.

At lights out, Whincup got away while Van Gisbergen was forced into the middle of a three-wide situation with Tim Slade and Craig Lowndes splitting him.

It was Slade who came out on top, but Whincup was long gone after a clean start.

Andre Heimgartner clobbered the rear of another car (Garth Tander), while entering the pits. Soon after, another Nissan driver in Simona de Silvestro was penalized for an unsafe pit release.

Whincup did not pit early however, leading the first 11 laps before making his first stop emerging 3.7 seconds ahead of Van Gisbergen, who got around Caruso after he went wide.

Lee Holdsworth would retire from the race on Lap 20 with apparent mechanical issues, pulling off into the infield.

Whincup extended his advantage to over five seconds until Van Gisbergen made his second stop of the race at the halfway point at Lap 21. A couple laps later, Whincup followed suit. He now held nine seconds over his teammate, but didn’t reclaim the lead until Mark Winterbottom pitted on Lap 30.

In the closing laps, a mistake in Turn 1 by Slade allowed David Reynolds to sneak through.

But up front, it was all Whincup as he pulled out to an 11.2 second lead at the checkered flag in a dominant showing. Van Gisbergen and Reynolds filled out the other two positions on the podium.

“Yeah, big thanks to all the engineers at Red Bull,” said Whincup. “They worked tirelessly throughout the weekend to make sure we had two fast cars.

“I know it’s cliche but full credit to the team, they worked hard behind the scenes.”

Slade was forced to settle for fourth, followed by Nick Percat, Scott Pye, Will Davison, Craig Lowndes, Michael Caruso and Scott McLaughlin rounded out the top-ten.

The title fight has tightened up considerably with Van Gisbergen actually eclipsing McLaughlin and seizing control of the championship standings.

“Yeah that’s pretty awesome, but such a long way to go,” said Van Gisbergen. “We need to keep our heads down.”

There’s now just a 19-point split between the title rival.