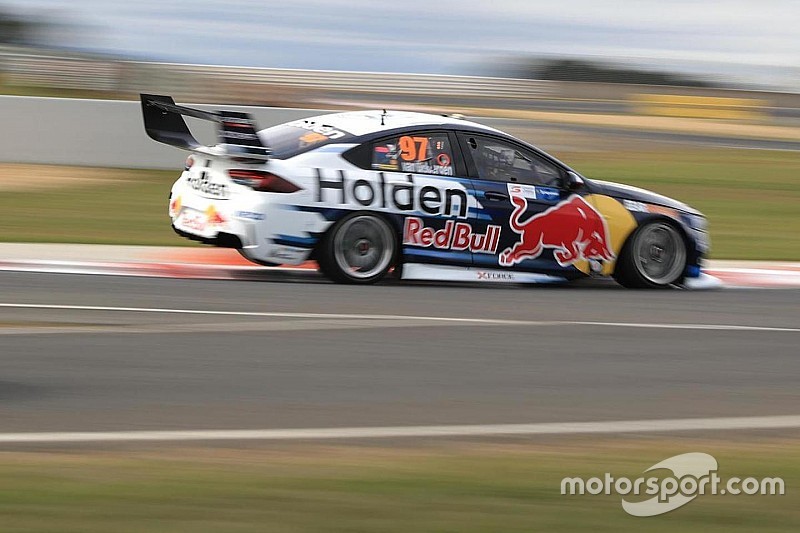 Shane van Gisbergen broke the unofficial Symmons Plains lap record on his way to top spot in Practice 1 in Tasmania.

The Triple Eight driver has all but secured a Q2 berth for tomorrow's first use of the new 'short track' qualifying system, making the most of good conditions for Practice 1 to go fastest with a record-breaking 50.789s.

Van Gisbergen was constantly near the front of the field throughout the 45-minute session, first going quickest with a 51.337s inside the first few minutes.

It wasn't until after the quarter-hour mark that the Kiwi's early time was bested, teammate Jamie Whincup taking over at the top with a 51.216s.

Shortly before the 30-minute mark James Courtney enjoyed the briefest of stints in P1 thanks to a 51.170s, before van Gisbergen returned to the top spot with a 51.066s seconds later.

With eight minutes to go Craig Lowndes became the third Triple Eight driver to go fastest, popping up on top with a 51.027s.

That was the starting point for the 'happy hour', Fabian Coulthard piecing together a two-lap stint that saw him go quickest with a 51.014s, before improving with a 50.994s, the first lap under the 51s bracket.

A minute later Scott Pye was on top with a 50.853s, before van Gisbergen came out swinging with two minutes to go, laying down a 50.819s before putting it to bed with that record-breaking 50.789s on his final lap.

"It's a really good start," said van Gisbergen. "In practice now the game has really changed; you have to put down a good marker. Normally we'd save a bit, but you've got to put down a marker to make sure you're in that Top 10. You never know what will happen in Practice 2 with weather or red flags.

Pye and Coulthard ended up second and third, with Lowndes slotting into fourth thanks to the lap that had put him fastest.

Whincup made ground late in the session to go fifth quickest, ahead of Courtney, Mark Winterbottom, and Tim Slade.

Scott McLaughlin was ninth fastest, but only after a lap right at the flag moved him up from 11th and into the Q2 bubble in case the weather changes before Practice 2 this afternoon.

Michael Caruso was both the best-placed Nissan and the final driver currently sitting in an automatic Q2 berth.

There are some big names that will definitely need to find some speed before Practice 2, with David Reynolds just 11th fastest, Chaz Mostert down in 16th, and Tickford young guns Cam Waters and Richie Stanaway 21st and 26th respectively.